Looking to create a new recurring enemy for Scrooge McDuck, 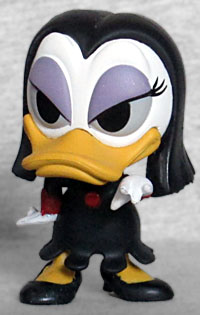 Carl Barks came up with the sorceress Magica De Spell. Where the Beagle Boys wanted Scrooge's money because, well, they just wanted money, and Flintheart Glomgold wanted to surpass Scrooge as the richest duck in the world, Magica was just interested in gaining his Number One Dime: she wants to melt it down as part of a spell that will give her the Midas touch. In the comics, she's Italian (she lives next to Naples on the slopes of Mount Vesuvius), but in the cartoon she had an Eastern European "Natasha Fatale" accent.

Rather than making Magica an old crone,

Barks opted to make her young and sexy, basing her on Itallian actresses Gina Lollobrigida and Sophia Loren, with a dash of Morticia Addams thrown in for good measure. She wears a long black dress with red cuffs, and the toy even gets her high heels despite its small size. Her eyelids are half closed, in a bit of a seductive look, and she's posed in a decent "spellcasting" stance, with one hand on her hip and the other held out before her with the fingers at odd angles.

Magica is a Hot Topic exclusive, but she's the rarest of the three: Negatron and Swimming Scrooge are both 1:6 figures, but Magica is 1:12 - if you're curious, I got her from the top right corner in the back.