Disney took a real risk when they created DuckTales - the show was expensive to produce, and there was no guarantee syndicating it would recoup all the costs. When it proved to be a hit, Disney moved to capitalize, next creating Chip 'n Dale: Rescue Rangers. 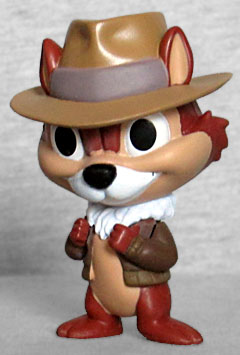 Introduced in 1943, Chip and Dale were originally just a pair of nearly identical chipmunks who caused trouble for Mickey, Pluto, and especially Donald Duck. (When they were given proper names instead of just being plot devices, they also got some physical differences so you could tell them apart.) Chip is the leader of the pair, the thinker, the planner, the one who considers the consequences of his actions. He has a black nose (like a chocolate chip) and when his mouth is open, has two prominent incisors. His Rescue Rangers design takes its cues from Indiana Jones, with a fedora and a leather jacket. For this Mystery Mini, Chip is standing with his hands on his lapels, but a paint error has left the tuft of fur on his chest colored the same as the trim on his jacket. Whoops! 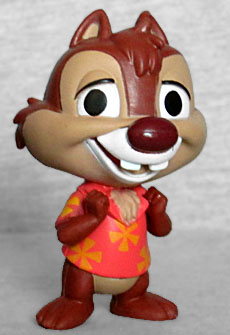 Dale is the follower, the goofball, the happy-go-lucky one who trusts that everything will just work out. He's the grasshopper to Chip's ant. He has a red nose and a large gap between his teeth, plus he gets a bit of ruffled fur on his head, while Chip's stays smooth. His personality remainded the same for Rescue Rangers, but he did put on some clothes. Almost the bare minimum of clothes, really: a Hawaiian shirt. While Chip dressed like Indiana Jones, Dale dressed like the man who almost was Indy, until scheduling conflicts got in the way: Tom Selleck as Magnum PI. Dale is also holding onto his lapels, like a cool guy, and his mouth is open in a big smile, while his eyelids are half closed, because he's kind of a dope. 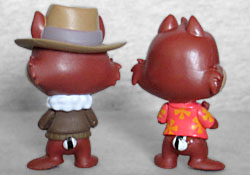 Infuriatingly, Chip and Dale are both available in a 1:6 ratio, meaning there are two of them in every case. Two? Why! That is way too many ostriches Chips and Dales. The only mitigation is that none of the exclusive cases - at TRU, Hot Topic, or GameStop - have any Chips or Dales at all, so maybe it all evens out in the long run.