Ladies and gentlemen, please rise for the Decapodian national anthem.

Mixed in with the two Aliens, three Predators, two Tron guys, and a yin/yang of Firefly characters (one played by a good guy, one... not), 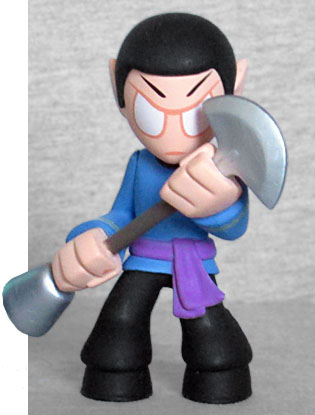 Series 1 of the Science Fiction Mystery Minis also gave us the world's favorite Vulcan, Spock. Since an average Spock figure would just see him standing around stoically, possibly holding a primitive Original Series tricorder or something, Funko instead went for an "Amok Time" Spock, aka "the time he gladiator-fought Kirk because he was in heat like a house cat." Technically known as "pon farr," the septennial period sees Vulcans biologically need to mate or die, which often led to fights between males ("kal-if-fee") for the right to get summa dat space booty. So Spock is wearing, in addition to his normal Starfleet uniform, a stylish purple sash, which I believe is club code signalling that he's looking for a LLAP handie behind the nearest decorative column? Don't quote me on that, though. He holds his weapon high enough that it partially blocks his face, and this is so far the only Mystery Mini to have painted eyebrows.

Spock was available in a 1/12 ratio, putting him in every case. Boy, was he in every case! Trust me, you'd try to find something fun like Judge Dredd or 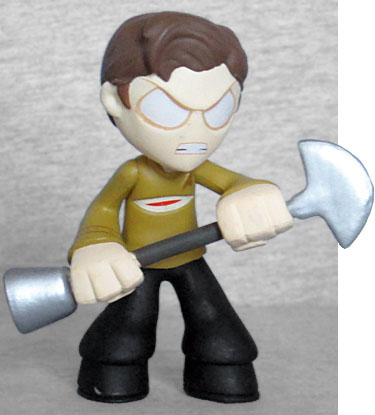 the Mars Attacks Martian, but no, you'd get another Spock instead. It was a real pain! Fortunately, Series 2 added a little bit of value to the figure by offering a 1/12 Kirk to go with him. Taken from the same episode, Captain James Tiberius Kirk is also armed with a lirpa, the traditional Vulcan melee weapon with a blade on one end and a weight on the other. He holds his arms lower, so you have an easier time making out the Starfleet badge molded on his shirt than you did on Spock's, but the real reason it was done this way was so you can appreciate the big bloody slash across his chest. Kirk's expression is delightfully angry, with gritted teeth and angled eyes. Unfortunately, for some reason the humans in Science Fiction Mystery Minis Series 2 were all given exceedingly pale yellow skin - Spock's the one suffering from "blood fever," but Kirk's the one who ends up looking sickly. 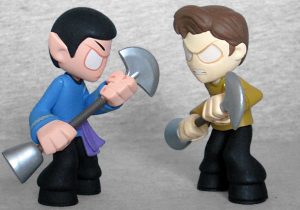 Series 1's Spock was a bit of a disappointment, and since he came out shortly before Leonard Nimoy passed away, I admit I considered taking advantage of the "death tax" to sell mine off. Series 2's Kirk redeems him somewhat, but the faded paint means that figure isn't so great, either. Still, you have to admit there's something appropriate about these two old buddies being there to support and improve each other.