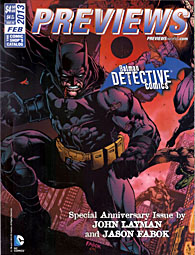 Masters of the Universe is now an ongoing comic, and the first issue is listed on page 145.

For everyone who's ever said "I love the Dynamic Duo, but wish they didn't look good," page 154 has an Aardman Batman & Robin two-pack.

Two new series of Minimates are listed on page 393: Series 50, which was voyed on by fans, and Series 51, which is all based on "Marvel NOW!"

Walking Dead is up to its third series of Minimates already? Where does the time go! It goes to page 394 to see the zombies.

Page 396 reveals that Star Trek is getting back into the Minimate game, this time with a line that covers all the movies and shows. This first series has sets based on Wrath of Khan, First Contact, DS9 and Enterprise.

A new series of DC Unlimited figures are on page 405: New 52 Aquaman and Darkseid, and a Joker and Superman based on that new fighting game.

If you missed the Alpha Flight Minimates, they're on page 412.

Predators Series 8 is the one that finally has Dutch. Two Dutches! You can go to page 412 to pass him to the lefthand side.

Page 413 has new Prometheus figures, including the much-awaited David.

Also, fans of classic tv and movies should look at page 413 for the Hot Wheels based on Ghostbusters, Back to the Future, the A-Team and more.

The new Transformers toys are listed on page 416.

You fans of import figures will like page 430, with the Play Arts -KAI- versions of Arkham Asylum Harley & Ivy.