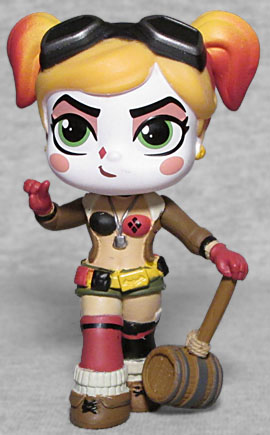 Harley! We knew eventually there'd have to be some overlap between these Mystery Minis and DC Direct's Bombshells line, it's just surprising it took this long. To repeat what we said before, Bombshell Harley has pretty much the same backstory as the mainstream one: she was a doctor, fell in love with the Joker, she got free, all that. Just because she's from Britain instead of Brooklyn, it doesn't really change who she is.

What does change her is that she seems to have powers. Not the "generally faster and more durable" powers she has in the comics, but "half a living cartoon" powers - everything that comes near her turns into comedy gold. Does she need to pull an improbable weapon out of nowhere? Does she need to survive having an anvil dropped on her, or a bomb exploding in her face? She can, as long as it's funnier that way.

Harl doesn't duplicate the pose from her statue; that saw her 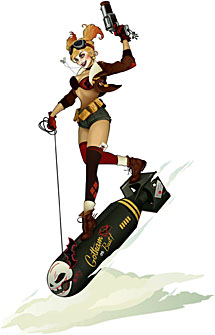 riding a bomb out of the sky, and this just sees her posing next to her giant mallet. She has one foot in front of the other, and is raising one finger to her cheek, in an "ain't I cute" sort of display.

Her World War II clothing could easily pass for modern. She wears brown combat boots with thick socks, one red and one black stocking, grey shorts, a red-and-black bra beneath a brown bomber jacket, and red gloves. Goggles are pushed up on her head, and the ends of her pigtails are dip-dyed red. Silver dog tags are sculpted hanging from her neck, and she wears a utility belt with red and black pouches. Her white face has been painted with her pink eyeshadow and the circles on her cheeks, plus a crooked little smirk. They also... attempted to do the red diamond beneath her right eye, but it's somehow managed to drift over next to her nose, which isn't proper at all.