A dedicated Lt. Colonel and patriotic member of the US military, 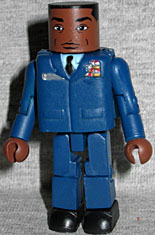 We already had a Senate Hearing Tony Stark, so it's nice to get Senate Hearing Rhodey to go with him (even if they don't call him that). The figure is wearing his dark blue Air Force uniform, and has the same head as the previous exclusive. The jacket is a retooled version of the one that originally came from Series 22's Gen. Thunderbolt Ross - this one still has the necktie and the pins on his chest, but has changed the pockets. It makes the body a bit bigger than Don Cheadle's would be, but this is a good likeness. 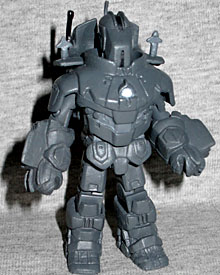 Specifically designed for aerial maneuvering and atmospheric combat conditions, a handful of these advanced Black Drones are capable of destroying entire squadrons of traditional fighter jets.

This set is hands-down the best way to get a military Hammer Drone: to get the Navy and Marines, you had to find someone who bought the counter dump; to get the Army, you had to buy the pigeon-toed Iron Man. But the Air Force one comes with a fairly unique Rhodey, making this set a winner.