The Transformers BotBots got two nominations in this year's ToY Awards: Best Line, and Best Packaging. I lobbied pretty hard for them, but both times, they lost to Fortnite! I say that's a travesty, not because Fortnite is bad, but because BotBots are awesome! And the Arcade Renegades' packaging was clever as heck! 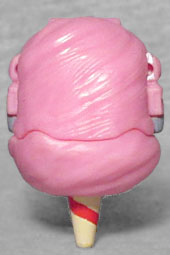 If the fact that the mall's arcade is three stories tall wasn't enough of a clue that it's something out of the ordinary, then the inclusion of food items should be; your average arcade doesn't sell big puffy cones of cotton candy. A modern technological take on the classic spun sugar, cotton candy machines caramelize sugar with a heating element, then use centrifugal force to shoot it out of tiny holes - it cools so fast that it doesn't have time to clump up again. The toy is a lot denser than real cotton candy, of course, but the surface is sculpted with dips and bumps that match the way the real stuff looks. There's even a little cone sticking out the bottom so someone can hold it.

This is one of the new molds in the Arcade Renegades set, but the conversion remains simple: pull the arms out, fold the legs down, extend one end to expose the face. 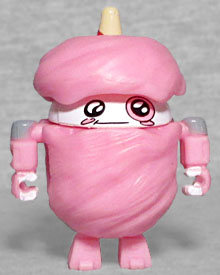 watch her dance. And if they don't, the dancing diva spins into a tantrum, twirling through the arcade like a pink tornado. Careful not to get caught in the storm of puffy pink fluff.

The robot mode is a cute little tube. She still has the wavy texture of the cotton candy, with tiny squarish limbs poking out of the cloud. The grey shoulders looked out of place in the altmode, but here they help to break up all the pink. Like a puppy (or Domino), she has a circle around one of her eyes. It's pink, and the eyes look watery. There are little pink marks on her cheeks, and the mouth has a smile line on one side, making her look minorly happy. The tip of the cone pokes out the top of her head, like a unicorn. 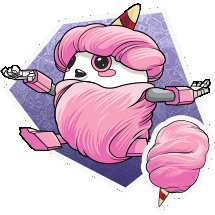 Tutu Puffz would make more sense in a "State Fair food" group of BotBots than one based in an arcade, but that's hardly important. As one of the new bots, she's available in every iteration of the set, up in the "screen" area.