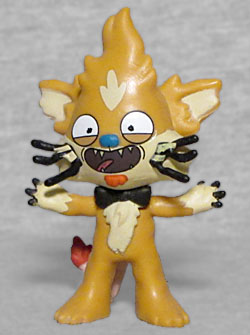 In the Season 1 finale of Rick and Morty, "Ricksy Business," Rick and Summer throw a party while Beth and Jerry are out of the house. They both invite their friends, which in Summer's case means a lot of kids from school, and in Rick's case means a lot of outer space weirdos: Birdperson, Gearhead, Abradolf Lincler... and Squanchy.

Squanchy is a methed-out cat creature wearing a bowtie. He looks like Smarf from Too Many Cooks. He comes from Planet Squanch, and his species are the Squanchies. As you can tell, a whole ton of work went into creating this guy and his rich, layered backstory. (Like the Smurfs, Squanchies use the word "squanch" to mean pretty much anysquanch.)

to identify inside the blind box, because he's so small - even counting the big tuft of fur on his forehead, he doesn't reach the 2¼" mark. Unfortunately, he wasn't the only small figure in the assortment, so you still had a chance of pulling Mr. Poopybutthole (1:6), Snowball (1:24), Ghost in a Jar (1:72), or Tinkles (1:72). Squanchy was 1:36, for the record. He's an orangish tan, with lighter patches on his forehead, ears, cheeks, hands, and chest. He has a reddish soul patch - matching the tip of his otherwise-bare tail - and a blue nose, and his wiry whiskers are separate molds glued in place. 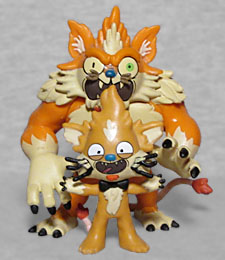