The gimmick of this year's "Power of the Primes" theme is that the Transformers can join up with various "Prime Masters" to gain new powers. When you buy a Deluxe, Voyager, or Leader Class figure, it includes a card revealing the powers granted by one combination. Just one. Out of 12. So here's a list of all the powers Rodimus Unicronus can gain: 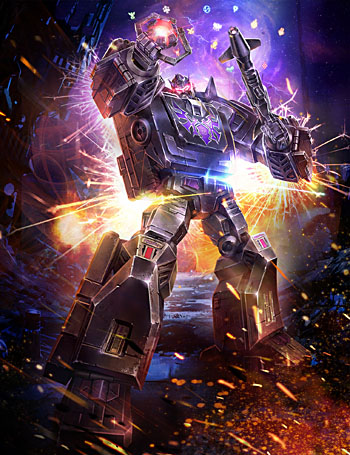 Alchemist Prime
Distills the essence of evil from the Matrix of Chaos.
Amalgamous Prime
Takes the shape that brings maximum destruction.
Alpha Trion
Corrupts the databanks of Cybertronian super computer Vector Sigma.
The Fallen
Vows to destroy Unicron and take his place.
Liege Maximo
Spreads dark prophecies to destroy the will of bots.
Micronus Prime
Power-links with bots to consume their spark.
Nexus Prime
Combines with bots whose abilities advance his mission.
Onyx Prime
Traps sparks in the spirit realm so they canot return to Primus.
Prima
Uses the connection Prima has to the Matrix to track its wielder.
Quintus Prime
Extracts Energon from planets so new life cannot grow.
Solus Prime
Forges dark replicas of ancient Cybertronian weapons.
Vector Prime
Pursues Matrix bearers through time to destroy them.