This is the latest in a series (of indefinite length and regularity) of blog posts memorializing cancelled toys. Our subject today is Lego Las Vegas.

Set #21038 would have been part of the Lego Architecture line, and was planned for release earlier this year. 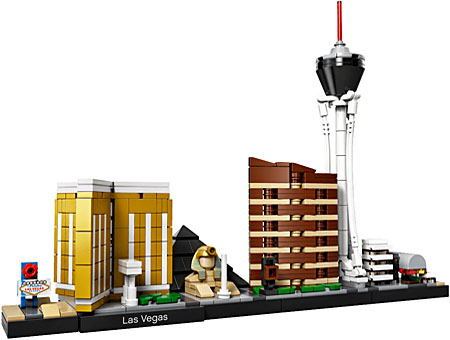 Unfortunately, you see that second building from the left, the golden triskelion with the white pillar in front of it? That's the Mandalay Bay hotel, site of the big mass shooting last October. Feeling that including it in a set was insensitive, Lego cancelled this one and replaced it with a similar set (#21047), which swaps out the Mandalay Bay for the Bellagio, the one with the famous fountains out front.

This entry was posted in cancelled toys, Lego. Bookmark the permalink.