Taken as a whole, this seventh series of Imaginext blind bagged figures is pretty dull. Essentially all (but one of) the figures are dominated by black or orange which results in a lack of visual diversity, which is a shame because individually there are some really great additions to the collection here!

This series has a nice light blue/aqua color theme to the top of the package, which looks pretty nice and is a notable shift from the pink of Series 6 [ http://www.oafe.net/blog/2018/09/imaginext-blind-bagged-figures-series-6/ ] making it easy to differentiate between old and new. This was a really tough series for me to find and I went months and months increasingly thinking I'd never find it… but then I lucked out on a fresh box at some random Walmart and my dreams were fulfilled (and then subsequently I started seeing it around a little more commonly). The accessory featured on the back of the package is the Mariachi's guitar, and interestingly the silhouettes feature a color fade this time around. It's neat and a bit more dynamic and appealing that the standard solid color from past series. And, of course, Mattel has saved our minds a lot of frustration and our fingers a lot of squeezing by including codes pressed in to the wrapper on the upper left corner of the back, above the "i" logo - and I've included those here once again. 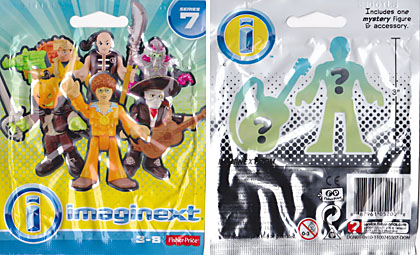 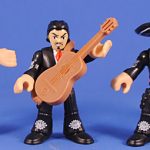 Everyone loves a Mariachi, AND they make for great battle builders! The body is all-new sculpt and it really nails the classic look with a tuxedo-sequel torso, fringed cuffs and stripped pants. There's even some nice floral-ish prints on the boots and sleeves to complete the look! The head is nice, and feels a bit like a reference to Antonio Banderas' character in Desperado, but maybe that's just me. He comes with a guitar that has a strap which loops around his torso, but it is tough to get him to hold the guitar in that pose, and the sculpted strap also gets in the way when it's not being worn. No Mariachi would be complete without his Sombrero and it turned out well enough here. It has a skull mask attached to it, which is neat but kind of a bummer as it means your options are Sombrero-less Mariachi or Dia De Los Muertos Mariachi. Still though, it's a cool figure and well worth getting a couple of to build up the band! 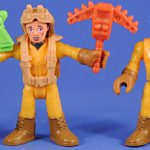 This is a weird figure. The colors are the most noticeable thing since they're overwhelmingly in the soft earthtones and don't really look that good together... but of course they can't get too close to the movie Ghostbusters outfits because they're already skating that line super close. Heck, he even comes with a straight up PKE meter! He also has a second accessory of some kind of gun, and it's a weird sculpt. The gun is not that interesting or ghost-y looking and it has a "normal" handle sculpted behind the "Imaginext" handle which only succeeds in getting in the way. His wear-able accessory is a removable not-a-Proton-Pack which is pretty neat and includes totally-not-Ray's-Spectral-Goggles on the top. It's pretty cool but I wish it was cast in a darker color (like a gray-blue or something) to help it stand out better from the jumpsuit (or that the jumpsuit was a different color, like olive green). The figure is fine and is clad in a basic jumpsuit, so it's possible he's just reused from something. The face, though, is weird and kind of disappointing. I like the suggestion that he's scared but I think it'd have worked better if the goggles had covered his eyes while the pack is being worn. It's the weird cheek lines that bug me though as they seem to make him look emaciated... This is a good, neat figure but it could have easily been much better with just some basic color changes. 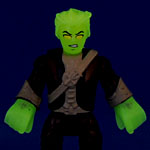 This guy is AmAzInG!!!! Easily one of the coolest figures they've ever made (and, it suddenly occurs to me, a villain for the previous figure to fight)! The figure is a really nice 18th Century outfit and head; and it really seems like simple color and face-print changes could easily make turn this guy into a hero (or the American Revolution?), which is pretty darn cool and a real testament to the power of color choice! The colors here are fantastic! The maroon, black and off-white play off each well but it's the green skintone that really spikes the punch and sets them off! Oh, and that green skintone? Yeah, his hands and head glow in the dark!!! He comes with a neat sword and an awesome pumpkin mask with flowing tattered cape! This is basically a perfect figure! He looks great with and without the jack-o'-lantern mask and the colors all bounce off of and play really nicely with each other. I can't recommend this dude enough! 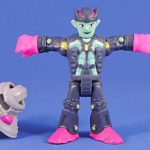 They've done many an alien figures in this line and I gotta admit this is probably the dullest. The colors just aren't that interesting and... I don't know, I can't really place my finger on it. The sculpt is also only "okay" and the removable helmet/chest armor is not interesting at all. The latter could really use more paint on it too - while worn this figure becomes pretty boring. It wasn't until I had him in hand that I realized the "gag" of the figure, which is honestly pretty fun - the light green is actually his body, which means this is a little 1950s style robot strapped into a human-sized exo suit! That's pretty clever and fun, but that means the whole thing relies on that gag making sense but because the sculpt of the body is just a fairly shallow relief and the paint is rough, that gag isn't really clear until much closer inspection. I wish they could have pushed the torso sculpt a bit further or something to make it all work a bit better and clearer. 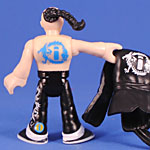 Next we have a new member in the growing "Asian fighter" sub-theme. I've never been big in to Ninjas or Kung Fu, or what have you, so please forgive my ignorance with this genre and/or disinterest in this figure. He's fine for what he is but he's kind of bland to me. He comes with a blades and staff and a removable sleeve-less jacket. The sculpt is pretty basic but the paint is pretty fun. He gets some battle scars on his right pec and a neat blue dragon tattoo. On his back is another tattoo of the Imaginext "i" ringed in a dragon (which is duplicated in white on the back of his jacket) that is pretty wicked. It's neat for what it is, but it's not really my jam. 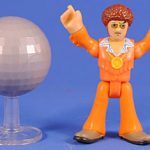 Okay, so this is pretty goofy. It's not really an exciting figure or something that fits in with anything else but he is fairly iconic for the '70s Disco era and is quite fun as a result. His arms and torso have that classic fringe dangling down and he's wearing a blue and white wavy-patterned, wide collared shirt underneath it which, combined with the big medallion (featuring the Imaginext "i"), really sells the whole '70s vibe. His head looks like a reuse of the basketball player's but it's actually a new sculpt and features long sideburns. His accessory is a Disco Ball - it's cast in full silver plastic which makes sense but is kind of a bummer and comes with a clear stand it can plug on to. It's a fun figure but, especially with the Disco Ball, really needs at least one companion to feel complete... Unless he's the last remaining Disco'er... keeping the groove alive by his lonesome.