Okay, this is a weird series... Like some previous ones it really favors only a few particular colors (as if there was a sale on them, or excess that needed to be used up) which is kind of a bummer but not nearly as odd as that four of these six figures are just repaints! 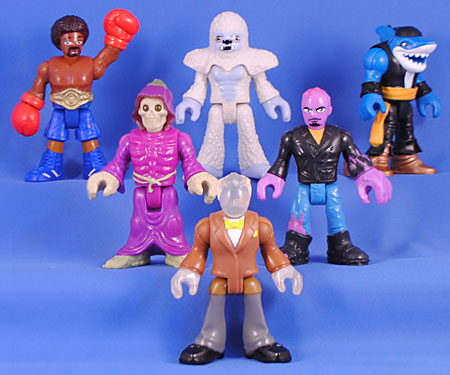 Series 9 gets a purple background on the front of the package, which is fitting since this series favors cooler colors and, in particular purple. The arrangement of the figures is fairly good, though, by putting the more contrast-y figures in the back so that the purple ones don't blend in. Plus, they actually put the black guy front and center. The silhouettes on the back feature the standard "basic" male Imaginext body and the Invisible Man's sack-head. They are filled in with purple but like Series 7 they use a color fade which does look remarkably better than a solid color. As always, each figure has an individual code, listed below, punched in to the top left corner of the back of the package - all the better and easier to find the figures you want, my pretties! I'm not sure if this series was an exclusive but I found them around Easter time of 2018 at Walgreens and I don't feel like I've seen them much or at all at other stores. 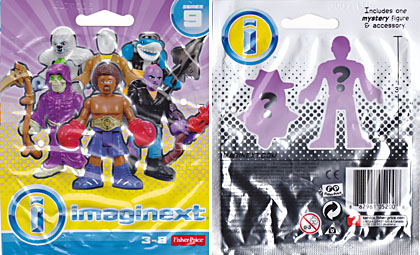 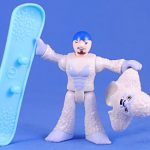 Yeti? YAY! Snowboarder? BOO! This is 100% repaint using the figure and mask from the Series 2 Bigfoot and the snowboard comes from the Series 4 Snowboarder. At least the snowboard kind of better justifies that this is just a guy in a costume rather than an actual Yeti (like in the Target exclusive line). Aside from the addition of a blue bandana on his head, his face is identical to the Bigfoot guy, implying that this is actually the same dude - a first for the line. It's a testament to how good the sculpt is of the body and mask that this looks quite good in the Yeti colors and even feels more different than it actually is. Part of that sense is the new face deco on the Yeti mask, which features angry yellow eyes with pink bags under them and the suggestion of an open mouth. I really must confess I like this much more than I expected to or feel like I should. He's fun and cool! (no pun icetended) 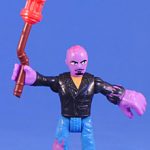 This dude is another weird one-off, that I'd seen described as "post-apocalyptic" somewhere, so I'll go with it (maybe he can fight the Welder guy from Series 8). This is the kind of figure I buy just to complete the set. I suppose he's fine for what he is, with a bulging mutant left arm/hand and right leg/foot, plus some bubbling on his head, but I don't really "get it." The biker outfit seems a bit incongruous and the fire hydrant accessory is well done but an odd, if not confusing, choice. 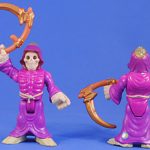 Death!!! Who doesn't love a good Grim Reaper!? This is a wild figure with a remarkably detailed sculpt - almost to the point of not feeling like an Imaginext figure, or at least of the current aesthetic. His cloak is all wrinkly and form-fitted to his skeletal body implicitly beneath it. Due to his robe he has a mono-leg, which isn't that much of a change since all Imaginext legs move in unison, but his arms, hands and head move normally. His head is actually cast as two parts - the skull, in solid bone-color plastic, and then the hood and eyes, which are cast in translucent yellow plastic. He has what I think is supposed to be a bit of fire on the crown on his head which is meant to light-pipe down to his eyes, but sadly it doesn't work, really. Since this whole hood is the same piece the light gets dispersed so it would have been better to have the "flame" continue down the back of the head to allow in more light OR to have the head solid expect for a single flame-to-eyes piece (like the old PotF2 Jawas). I appreciate the intent, but it ultimately hurts the figure since that whatever-it-is stuff on the top of his head is confusing and weird. I should also point out that his robe is bright purple rather than the traditional black. Sure I would have preferred black, but this purple is in keeping with the more fun, family-oriented Imaginext brand. I just wish that the shade of the torso matched that of the hood, arms and skirt. This guy comes with a rockin' excellent scythe that can be single-hand or double-hand held - it's awesome. This is easily the best figure in the series and a most welcome (and surprising) addition! 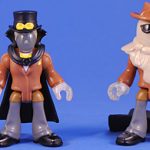 YES! We haven't had any classic/Universal monsters in the line since Series 5 so this guy is a very exciting addition to the collection. He's a straight-up repaint of the Secret Agent from Series 1 - or would be if they hadn't retooled his torso to remove the raised "i" logo from his left breast! It's a good change, and really just highlight how weird it was to include it in the first place, but if they went to the trouble of retooling it why didn't they change up the sculpt at all? At least the brown, yellow and gray colors make him seem quite different from the Agent, and they're fitting for this character. His head and hands are cast in clear plastic which is surprisingly cool looking! He comes with an all-new mask to hide his horrible truth, but the mask is... well... pretty bad. It's weirdly over sized and fairly undetailed save for sunglasses and a fake nose which REALLY make the thing look like some awful rubber ducky to me. The brown fedora atop the sack is part of the sculpt. Fortunately, they also threw in a repaint of the cape-and-top-hat from the Steampunk guy in Series 2, which is a good alternative. I wish they'd just tooled up a new mask-and-robe/coat piece instead, and then possibly included the sack mask from the Series 3 Zombie as the repainted piece, but clearly everything about this series was done on the cheap. Besides, they must have lost that sack-mask tooling since this one is so clearly based on that (but is much looser and soft sculpt). Still, though, the Invisible Man is a signature part of the classic movie monsters so I'm quite happy to have him in the collection. 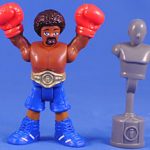 Does this guy look familiar? He might well because he's a repaint of two Series 4 figure - the Boxer but with the Basketball Player's head! He even gets a re-color of the boxer's practice dummy. At least they did swap the heads out, which helps make this guy feel more different (but if they wanted to go with a 'fro I would have preferred they grab the Disco stud's head with the sideburns - that would have been more fun/cool!). It is cool that they gave this guy a new face print, with a goatee and even a missing tooth. I had honestly forgotten about the previous Boxer but now that I'm reminded I'm quite happy to have an opponent for both! 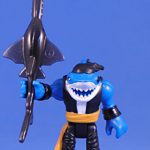 This is, I believe, the first time they've included a figure in the blind bag series that directly ties-in to a current series of the regular toys that is on shelves concurrently. It's a novel figure with a big bulky torso featuring a shark head and fin, all dressed up in Pirate clothes. I had gotten one of the smaller sets (and could have sworn I'd written it up in a Spoils of the Week, but apparently not) and this guy is a straight repaint of that figure. He come with a reused sword shark accessory, cast in translucent black plastic. There's just too much black with this figure and it leaves him pretty boring to look at. What is remarkable, though, about his colors here is that he is undeniably an homage to Ripster in Mattel's classic Street Sharks toy line! And based on the subsequent Imaginext Blind Bag lineups, we now know this guy kicked off a trend of in-house homages for at least the next two series to follow. I wish they would have ignored the vest sculpt and just painted his torso blue and white, to further push the homage (and cut down on all the black on this figure). This guy is ultimately only "okay," but he is a fun homage.