Sales and deals are the name of the game this week, kiddies. I stumbled across a Target that was dumping all of its remaining Monsters Fighters sets for a stellar 60-75% off! Now if only I could find the Zombie Graveyard and Vampire Castle at those prices I'd be set! Plus the latest batch of Lego Store Polybags, MattyCollector figures and more - all on this episode of Spoils of the Week. 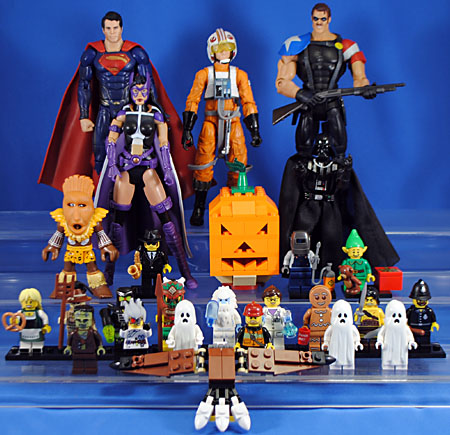 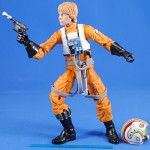 I am blown away by the articulation and how well it works. The leg straps do limit poses but the design of the ankles is PERFECTION - Luke stands rock-steady! The only downside is the balljointed elbows in lieu of double-joints. I suppose it's not too bad since the pilots don't do a lot, but it is a conspicuous oversight (especially on such a re-usable sculpt). Luke comes with his helmet, a blaster and his lightsaber. It has a loop so that it can hang off of a hook on the belt (no pegs in this scale!) and the blade is removable! The best thing about the figure though may just be the likeness - it's quite possibly the best ANH Mark Hamill that's been done since Gentle Giant's busts. Plus it's the rarest of all occurrences in that it actually looks better in production than on the prototype! 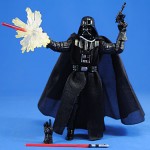 The most interesting figure in the 3¾" Black Series is this Vader. We have a million Vaders but his scene-specific accessories make this one the coolest Vader since the one that came with "Dead Kenobi" a few years back! He comes with the ubiquitous lightsaber plus alternate right hands/gloves and a "blast effect" from hand-blocking Han's shot! That's pretty darn cool! The other hand is meant to hold the blaster a la his force-grab of it but I haven't been able to make it fit. Plus, this guy gets a fully cloth torso robe so his belt and and upper chest armor are separate pieces that fit over it - pretty neat. If they have to keep re-doing the same characters/costumes over and over then lets hope they keep folding in these cool scene/moment specific elements to keep things interesting. 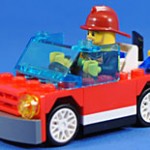 It's just another simple little car, nothing too exciting. The design does, somehow, work better than most of these types of things and I like its look more than I expected. The modern Firemen are fairly cool too and I dig the maroon helmet in particular. He comes with an axe accessory and a neat little fire extinguisher build, both of which clip on to the back of the car. It's fun for what it is but this set is nothing special. 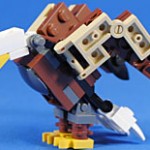 Picked this sucker up at the Lego Store which is fairly notable since, as my buddy pointed out, the brand stores rarely, if ever, carry the Creator polys. I'm sure glad they did though cause this thing is awesome. It does a better-than-expected job of looking like a Bald Eagle (and indeed being a micro-version of one of the newer full sized Creator sets) but it's the articulation that really makes it fun. The head, legs and tail feathers are all hinges so they're poseable however it's the vertical hinge of the wing paired with the horizontal hinge mid-wing that make it really fun. I had a good ole time having this guy soar around the apartment then tucking his wings to dive on unsuspecting toys. This is really the polybag format at its best - a good model/build and a hell of a fun toy! 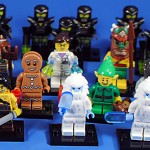 As threatened I bought another 9 of the "Evil Robot"/"Bad Mech" figure for my anti-Galaxy Squad army. I wish the Yeti used the longer legs from Toy Story's Woody but the big head head is pretty cool. The Tiki Warrior has some cool body art behind the mask which is a most welcome touch. I also love the Scarecrow a whole lot, and spent the majority of an hour just hunting for one, which I eventually did find, only to discover that I had pulled one earlier thinking he was a second Saxophonist. I need two of those because, come on, it's The Blues Brothers! So I guess I have more hunting to do, which is awful because I've got to tell you... I %#&@ing HATE unlabeled blindbags! This was such a miserable, time consuming experience I almost swore off the line entirely. They really need to even up case mixes and return to labeling - this is an absolute nightmare. 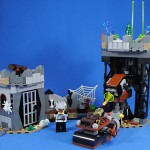 I'm not too crazy about the jail cell and short connecting wall between it and the "tower," and they're attached by hinges that serve no purpose as they just pull it all in closer to the operating table. The "tower" is cool though, with a lot of color on top via torches, electro-bursts and the lightning jewel, though those are all fairly obscured by the wall. There's a red light-brick inside the "brain beam" which glows out through the translucent green rod for a cool effect. The ratcheted, rolling table is great too; I just wish it lined up better with the brain beam, had restraints, and could tilt upright. Well, I guess that's the beauty of Lego... I can easily add all that myself. As for "Monster Fighters," you get the Old Adventurer guy plus the Errol Flynn-ish Dashing Adventurer in a give sky blue car/truck/mobile with a slide-out passenger seat for better attacking. It's a neat enough build that sort of evokes a 1920s-meets-Ghostbusters vibe, but it's probably my least favorite of their proper vehicles. 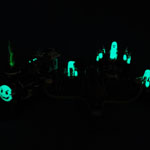 The bat wings flap as the wheels roll which is neat but I'm having a hard time getting them synced up. Each car is connected by a ball-and-socket joint, which works on the ground but they go flipping every which way when you pick it up. The engine is a pretty cool build and it even has an opening boiler in the control housing! What's fun is that the three ghosts and a host of other elements all glow in the dark! The Fighters of Monsters come equipped with a maroon airplane with a homemade ghost busting apparatus on it. The plane is an excellent design and build, and while initially I wasn't happy with the ghostbusting junk it's really grown on me. The good news is that it's all just added on top of the plane so you could easily not include it should you so desire. We then get Girl Adventurer and the Greaser Adventurer, too. This is a pricey set and I'm not fully sold on it but at discount it's pretty darn good! 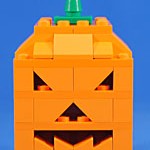 This is the Lego Store's sole offering for Halloween this year, which is a real bummer. They've done two polybags in previous years but I guess 2011's awful Spider set and its failure to sell even on markdown really turned them off. Regardless, though, this is a fun Polybag set and the best pumpkin/Jack'o'Lantern they've done yet. It's a full, three dimensional build and I like how the face turned out. I do wish they'd used translucent yellow bricks for the back to give it a make-shift light-pipe effect, but what are you going to do. I'm also a little put off by the maroon base and especially the tan bottom slopes - it's just a weird, conspicuous choice, but I guess they must have had a bunch of those left over they needed to use up. 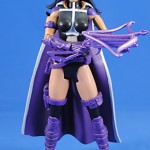 Well, I have no real attachment to this character and the costume is a bit of turn-off since it's Jim Lee's design from the very disappointing "Hush" storyline, but this figure has still managed to end up being one of the strongest entries in DCSC this year. She gets plenty of new pieces and, praise be to Odin, an accessory! What's more, an accessory of volume and significance which she can properly hold - it's like this is a real toy! You know what, I'm sorry for this snarkiness, I just get so frustrated with the Mattel system/output. But as far as figures go this lady is definitely one of the better ones in the line. Good sculpt, good paint, so on and so forth. I just wish it was a more interesting character or costume, but at this point there's not much else they can really do, I suppose. 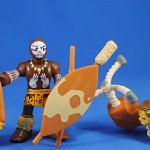 Well... it's official... I'm hooked on Imaginext. This guy comes from an appealing but fortunately short-lived line that took "iconic battlers" and gave them alternate masks - one with a permanently attached play-feature weapon. For this guy it's a lion mask with a wicker... thing, and when you push the button a bolo spins. My what fun. Being big into tikis it was his alternate mask that made the sale - a cool (almost The Mask-ish) Tiki mask! He also comes with a spear and shield, betraying this guy's more African than Islander roots. What was a particularly fun surprise is the very cool skull-ish face paint this guy is sporting on his face. Indeed, it's cool enough I kind of what another to display sans mask. However, at an $8-$10 pricetag I'll more than happily steer clear of this line in favor of the cheap blind bags and two-packs, which I imagine is what most people thought and thus it died after one series. 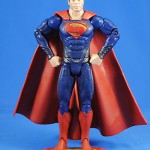 It had occurred to me a couple weeks back that I ironically had every figure from this series BUT the titular boyscout himself which was minorly concerning since he, and the rest of the line, has been hard to find of late. Well, luck was in my favor and at last the collection is complete. I really like the texturing on his body suit and all things considered this figure turned out quite well. The likeness is pretty solid, especially in hand. However, I would have liked ball-hinged wrists, an ab crunch and a properly balljointed head, but this is just Mattel after all - you can't expect market-leading quality from the Number 1 toy company in the world. Still though, this is the only figure in the line whose feet both fit comfortably on the base, so that's got to count for something. 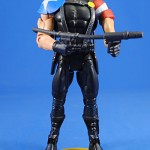 This is the strongest figure in the line because he's the most apt to translate into a proper action figure. He looks like the character, gets two different weapons and can easily hold both. I do wish they'd sculpted his kneepads full on to his lower legs, like with Huntress, rather than splitting them. His head is noticeably under-sized, a surprisingly contrary problem for Mattel. And of course... they couldn't "splurge" on the rights to the Smiley Face logo... something so costly I never even realized there WAS a cost to its use until this figure came out. Where this guy really upsets me though is when he's taken in context of the rest of the line. Two big accessories, when several figures get none. PLEASE! Oh well, whatever.