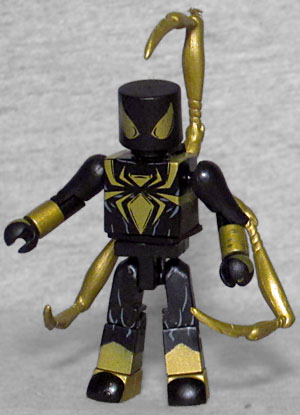 A mysterious figure has stolen Spider-Man's Iron Spider armor and now wears it as the leader of the all-new Sinister Six.

We're not going to spoil who's wearing the armor, but we will say it rhymes with "Shmiles Smorales' shmuncle." And he didn't steal the armor, he bought it. From someone who stole it. This figure gets the same paint masks as the TRU Series 21 version, but trades the red for black. The muscle detailing is golden now, too. We still only get three arms sticking out of his backpack, rather than the proper four; we'd say that's supposed to be some play on the way that Minimate hands only have three fingers, but it's not like Dr. Octopus only gets three of his arms, right? We're not surprised they didn't fix this problem for this release, but that doesn't make it less annoying.

With his ability to create portals to anywhere, 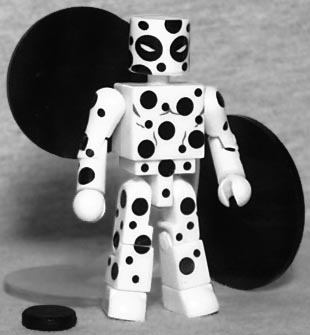 of varying sizes, the Spot is the ultimate getaway driver, as well as an unpredictable opponent.

The Spot!! If anyone ever says Marvel Minimates isn't one of the greatest toylines ever, they're wrong. Considering how distinctive Spot looks and the fact that all you need to do is repaint a plain body, it's surprising that the only other Spot action figure was in the 10" ToyBiz line. This is of course a plain white Minimate with lots of black dots on it, which is all it needs to be. It includes two heads - one his classic look, with lots of spots on it, and the other with a single large dot in the center of the face. Yes, that's how he looked as a member of the Sinister Six, but to us, it looks more like that panel from Amazing Spider-Man #589 where Spidey manages to punch himself in the face. 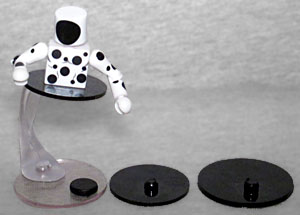 The set includes one of the "flipping" flight stands, which you could use for Iron Spider, but, if you don't mind stretching the hole a little bit, you can also use to make Spot's spots hover. The set includes six portals: two made from usual Minimate figure stands, and two made from small discs. Since his holes can generally just float anywhere in space, the waist stand will help with that. And just like with Kitty Pryde, Minimate construction means you can have him coming in or out of the portal in stages! This is the best!