Rustin's Spoils of the Week #66

With SDCC breathing heavily down my neck I need to really start dialing back my volume of purchases to increase the available Con Funds. This week is a bit light for me, and actually consists of about two and a half weeks' worth of finds so we have some ample discusion but we'll see how much longer I can keep this up. 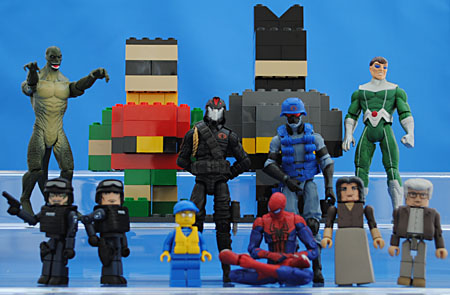 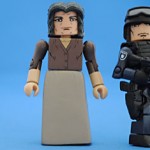 Found these two sets at a great store in Evanston, IL (Comix Revolution) and am quite pleased of it as now I can just complete the set at Toys R Us. This is our second Aunt May Minimate and first from any of the films. She's a very simple figure and while I prefer 'em that way her design is a bit too bland. The hair has a nice gray drybrush for a solid "peppered" effect. The spoiler-iffic SWAT guy is another very solid addition and very much what I'd prefer to see in the M.A.X. line. He has a fully painted torso under the vest but no alternate hair piece (which I would have assumed they could afford since Ben & May get no accessories). He does, however, get a machine gun, hand gun, and alternate head with a tangentially mentioned not heretofore not confirmed spoilery plot point - so have less fun at the movie because of it! Uncle Ben marks Martin Sheen's triumphant return to the world of comicbook movies after a 15 year absence and this 'mate does a surprisingly good job of looking like him. Plus, with the armybuilder cop included we can now have both heads on display, which is always a plus! 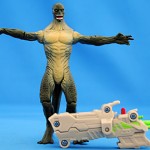 Yeah, like most people (I think) I'm still not too sure of how I feel about the Lizard design. Still though, he is the bad guy and thus is a must have for ye olde collection. This figure follows suit of Hasbro's new (miserable) marching orders of no wrist or ankle articulation - I guess Vonner took those with him when he left. This guy does get a swivel at the top of his tail, too, for what it's worth. Included is the ubiquitous missile launcher, and while it doesn't really fit onto either forearm well I like its look and design - expect to see it again next year in the Iron Man 3 line. 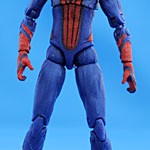 Whew, at least they don't totally hate us toy fans. This is the one to get, obviously, and he looks great. The new suit makes Prometheus-levels of non-sense for a high school nerd to make by hand but I'll be darned if it don't look super cool and make for great toys! I'm glad they went with "white" eyes because the orange is... I just can't get used to it. The figure does just about everything you'd want and expect - indeed my only two complaints are in the sculpt. The neck is too angled forward for my tastes giving a bit of a hunchback, then, of course, neither hand is in "hail satan"/"I love you"/"web-slinging" pose. 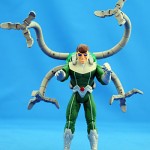 Yeah, man... probably shouldn't have got this. It's just "comic accurate" and "hard to find" so I bought without thought. I just so very much dislike this Ultimate costume... it's so... I don't know, it just doesn't work. I wish they'd just lift the embargo on the green/orange jumpsuit (or do my favorite Ock costume - the white business suit!). He has the "standard nine" Hasbro articulation points and a backpack that just clips on, no pegs/holes here. The tentacles are, as always, woefully short and pseudo bendy. Plus the claws are not articulated despite looking to the opposite. 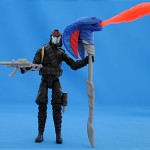 Look, kids, I love this helmet. It's just what I'd want from a G.I. Joe movie, so huzzah! The rest of the costume... mmm, not so much. Still better than last time but still a little too "meh," and I especially am bored of the all-black look. He comes with a little laser pistol he can barely hold and a very toyetic machine gun. I like the look of the big cobra staff quite a lot, actually, though it'll probably end up in the "Parts Box" anyway. The only real thing of note here is the legs - they have the standard balljoint hips but only hinged knees! Where's my double or swivel/hinge? What about the ankle? No sir - I don't like it. 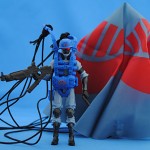 I do tend to love me some Cobra Troops and this is another fun one. I like the color palette, but will be quite interested if something so fun and toy-ish turns up in the film (note: it SHOULD). He gets a handgun and a super cool machine gun - I love its canister at the base! The novelty here is that he can also be a paratrooper, so he includes a parachute and a harness. The latter is actually designed to fit over the already-on grenade suspenders so brownie points for that, Hasbro! The harness clips snugly into plugs at the end of the 'chute strings. He even floats relatively well, but still falls with enough force to launch his helmet off under the bed should he land at the appropriate angle. 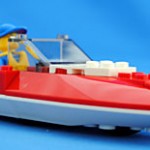 I've been eying this guy for quite awhile, but just never got around to picking him up and that paid off well as I just stumbled on a Target dumping tons of these for 50% off. Its a fun little build and a surprisingly "swooshable" boat - if you have kids this would be great for them. It's also about twice as long as I expected, another plus. The mini-figure is fairly boring, though, and there's not much that can be done with the bricks so I don't think I'll be picking up any additional ones. 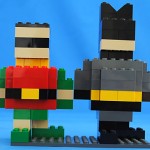 The Lego Store has started a new monthly exclusive, presumably built (no pun intended) off of the success of the Monthly Mini Builds. These are called "Pick-a-Brick Models" and basically are just Prick-a-Brick cups pre-filled with the bricks needed to make a particular model. They're usually blocky interpretations focusing more on 2x4 bricks than the smaller pieces we AFOLs tend to prefer but I appreciate the "old school" intent here. Usually the builds are bland and unengaging (the first month, March, had a Bunny, then there was a Hockey Player and July's will be Uncle Sam) but for June they shocked and awed with this Batman & Robin set! It's a fun and relatively easy build and includes plenty of bricks I don't usually see on the P-a-B wall. Plus, this one came with a sticker sheet so that you can apply the signature logos on the characters' torsos. This came in a Large Cup and went for the going price of one - $14.99. I really dig the idea of this and would love to see them incorporate more licensed characters or at least provide suggestions or other could-be characters. The biggest hurdle, for me, is that every build other than this one has heavily favored white bricks, which just look bland and boring. Once they start doing more colorful things I can see this "line" really taking off.

9 Responses to Rustin's Spoils of the Week #66