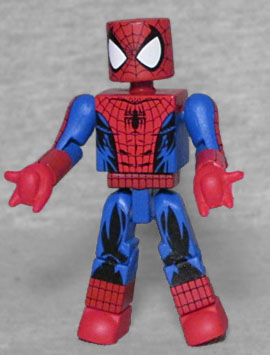 When the horrific villain Carnage unexpectedly returns, Spider-Man employs a sonic blaster to try and stop his deadly rampage.

Can't have a series of figures based on a Spider-Man crossover and not include a Spider-Man! That'd be silly. We've had lots of Spidey Minimates before, but never one as clearly based on the art of Sal Buscema as this one is - the eyes and the style of the webs make it clear this is based on the longtime Spectacular Spider-Man artist. He comes with a webline, so so many SpideyMates before him, but there's also something exciting and new: thwip hands! We have been asking for these for at least a decade, and at last they've delivered! 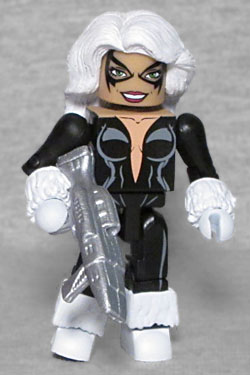 Felicia Hardy was a thief when she met Spider-Man, but the threat of Carnage encourages her to find her inner hero and protect her city.

Somehow, Black Cat's costume got even more cleavagey in the '90s than it had been before. It lost the fur collar, but the fur on the wrists and shins is done as separate molded pieces. the highlights on her costume are grey, and like every Black Cat Minimate before her, she's smiling. The set includes a Sonic Blaster the heroes borrowed from the Fantastic Four to defeat Carnage - it's obviously meant to go with "Sonic Attack Spider-Man," but pretty much everyone got a turn on the trigger during the story. The design was slightly inconsistent from book to book, but this sleek silver design is close enough.

Series 76 is one of the ones that has a Build-A-Figure, so the set includes some pieces for that. The figure is Shriek, and the pieces is her head.