Usually, Spider-Man keeps his face completely covered, to protect his 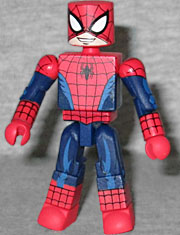 Is that a reference to Pizza Spider-Man? It certainly feels like one. There was a Spidey with his mask pulled up before, waaaay back in Series 4. Amusingly, thanks to the evolution of Minimate style over the years, this "animated" figure has more complex painted details than that "realistic" one. He has a very vibrant red and a very dark blue, though lighter highlights help to break that up. Mine is missing some blue on his shin, but that wasn't visible in the box. His black web lines are only on the front and back, not the sides, and on his belt they're not even on the back. He comes with a masked head, if you don't like his smile, and a length of gray webbing. But wasn't he supposed to be eating? They could have reused Jules' milkshake and burger hands! 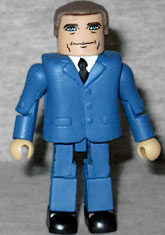 A highly ranked agent of SHIELD, Phil Coulson masquerades as a high school principal to keep an eye on Peter Parker.

I have plenty of Spider-Men, so Phil is the reason I got this set. I started watching Ultimate Spider-Man for a review, and Phil's role in the show is pretty cool. As Principal Coulson, he's wearing a blue suit, which actually makes him look like an Iron Man 1 Phil Coulson. Plus, there's a better likeness on this figure than there was on the "real" Coulson Minimate! It looks better the lower on the head it sits: his jaw lines should really align with the bottom of the head, but I passed on the first one I saw because it had been applied too high to look good. 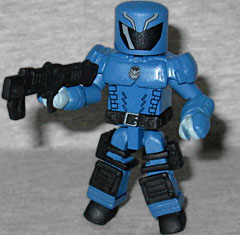 For those times when Phil needs to get in on the action, it wouldn't do for students to see their principal running around kicking ass, so he has a special SHIELD armor he wears. Turning Principal Coulson into Agent Coulson involves boots with padded fronts, pouches strapped to his thighs, a utility belt, armored gloves, and a piece that goes over his shoulders - that comes from Space Armor Iron Man, but has been remolded to remove the starburst. He has a smooth head cap that serves as his full-face mask, and is armed with a black laser rifle. It really is an impressive transformation. 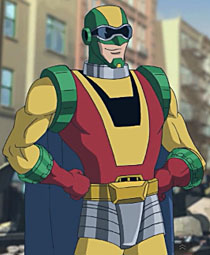 This set is a Walgreens exclusive, part of the confusingly numbered Series 1.5. Why would a complete set of four new two-packs need its own half-number? No idea. Right now Walgreens only has rights to current animated properties (so Ultimate Spider-Man, Avengers Assemble, Agents of SMASH and Guardians of the Galaxy), but they can make any character who shows up at least once in a cartoon. That really gives them access to a lot of characters! I mean, come on, there was a two-parter featuring Blade and the Creature Commandos, for cryin' out loud! But personally, I'd be elated if they gave us our first-ever figure of Captain Ultra. Which animated characters would you want to see turned into toys?