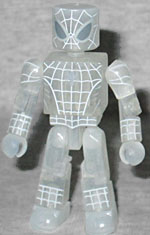 The Stealth Suit designed by SHIELD technicians for scouting and surveillance. It renders Spider-Man virtually invisible, and was used when Spider-Man infiltrated Damage Control headquarters.

Damage Control appeared on Ultimate Spider-Man? Maybe I should watch that cartoon. Stealth Suit Spider-Man is basically a clear Minimate with the Spidey details painted on in white, and silver for the eyes and chest/back symbols (which, coincidentally, is also the way Venom views him in the show). He's got one of those classic Minimate Spider-Man weblines, and also an alternate chest with a little bit of red and blue paint in the center to make it look like the stealthiness is malfunctioning and fading away. 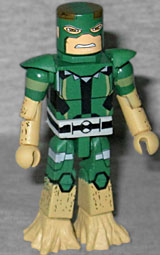 Flint Marko is an escaped convict who was caught in an atomic blast, turning his entire body into particles of sand. With total control over every grain, Sandman is nearly impossible to defeat.

Well how about that! Ultimate Spider-Man apparently uses Jack Kirby's Sandman design, rather than the classic. The suit was made for Sandman by the Wizard, and was designed specifically to help him fight the Fantastic Four (because when you've got a guy whose body can flow in any direction, what you really want to do is encase him in a bunch of inflexible steel). No one's ever made a toy of this costume, so that's nice to see, at least. 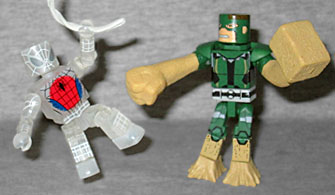 He's got the big sandy arms, as well as replacement arms that are more normal (but still sand-colored, not green). He has big shoulderpads, a hexagonal collar, and his head is painted with the ridiculous helmet or mask or whatever it is. Cleverly, he's got Groot feet, in order to make him look more like he's pulling himself together than just being a plain human. Nice choice!

This is only one of three Ultimate Spider-Man sets Toys Я Us has, but I've got enough Nicks Fury and Spider-Men; and while Carnage is kind of cool, Nova doesn't look as good as the last one. But this set, with a new kind of Spider-Man and a never-before-toyed Sandman, is a winner.