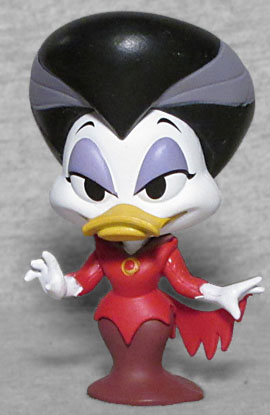 In their drive to create their own Batman, the creators of Darkwing Duck made sure to hit all the important points: the cape, the dark colors, the cool gadgets, the sidekick, the perpetually cloudy night-shrouded city, and the cast of over-the-top villains - including one that the hero dates.

Morgana Macawber is a magician who first appeared in the cartoon when she was using mutant mushrooms to rob people (she wanted to pay off her student loans quickly). By her second appearance, she seemed to have developed a soft spot for ol' DW, and by her third, they were joining a superteam together. Some girls will just do anything for the D! ("The D," of course, being "Drake Mallard," Darkwing's secret identity.) 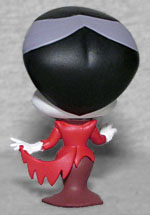 Morgana is the rarest Darkwing Duck character in the assortment, available only in a 1:72 ratio - one in every six cases. Her design is a mix of Elvira, Lily Munster, and the Bride of Frankenstein: she wears a two-tone red dress that covers everything below her throat and leaves her looking like she's gliding everywhere. A swath of fabric trails from the small of her back to her left pinky finger, and her bulbous bouffant hairdo has two grey stripes running through it. The figure is surprisingly stable, despite the big hair, thanks to the lack of separate feet. Her eyes are heavily lidded, and she seems to be smiling. You can decide for yourself whether she's happy or sinister.