The Transformers BotBots are divided into eight teams, based on what store in the mall they hail from. For instance, the restaurant on the second floor and the food kiosk on the ground floor both bring us members of the Greaser Gang. Spud Muffin is an upstairs guy.

The Greaser Gang takes things back to the days of the McDonald's Changeables by all being various foodstuffs - in his case, a box of french fries. The carton 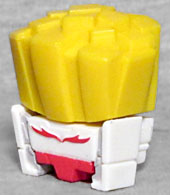 is white, with a few red elements that suggest they come from... "Angry Eyebrows Restaurant"? I don't know, that's what the shape looks like to me. If you think it's something else, go down to the comments and tell me I'm wrong.

The fries are a healthy yellow shade, not the anemic, undercooked potatoes served by In-N-Out, nor the hell-fried brown-orange of Five Guys. No, this seems to be aiming for that light Long John Silver's or Dairy Queen shade. Of course, given how thick each individual fry is, this is more like some specialty place, with... what's that term for fries cut extra-large? ["Big naturals." --ed.]

Converting BotBots is purposely simple: pull the arms out to the sides, fold down the legs, and then lift the flap on the back of the head and tip the entire assemblage of fries back to reveal the face. Ding, fries are done! 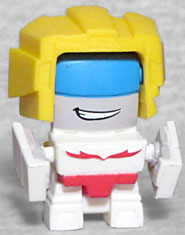 Spud Muffin is the king of the food court. He was voted Prom King, Most Popular Bot in the Kitchen, and MVP of the Deep Fryer Games. He's proud of all his achievements and likes to celebrate by crushing a few sets in the gym.

Spuds is a pretty simple robot, with two arms, two legs, a square little body, and a giant head. The red shapes on the fry box end up on his chest, while the stripe at the bottom becomes... underwear? A belt? Something. The face is gray with a large blue visor and a winning smile. In the official art, the fries made Spud Muffin look like he's got a typical Transformers helmet, but on the toy, it looks more like yellow hair. 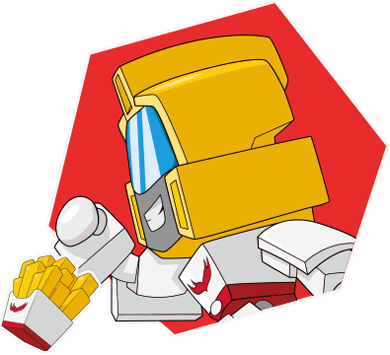 Available either blindpacked or in an eight-pack, Spud Muffin is pretty neat in both forms.