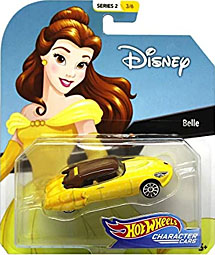 that we're now getting Series 2. Still nothing on the back of the card except photos of the other releases, though now there are twice as many - Series 1 and Series 2 are both shown. Which, honestly, is the thing that led me to get this release, because if Series 2 can introduce a Minnie to go with Mickey, and a Sulley to go with Mike, then it's entirely possible Belle will soon have a Beast.

In Disney's version, she's a judgmental bitch to everybody in her "poor provincial town" - you know, the people who she sings a mean song about

every damn morning while they're all going out of their way to be nice to her? Her, a stranger who moved to a medieval European village with her madman father? And yet they're trying to welcome her with open arms while she's throwing down the most savage diss track since Tupac's "Hit 'Em Up." You know, just like cloistered little towns are famous for. But yeah, keep talking about how she's a total innocent suffering Stockholm Syndrome.

As a Character Car, Belle is based on her party gown, not her casual clothes - so, lots of yellow here. While the car's body is fully invented by the unknown Hot Wheels designer, you can totally make out hints of classic French cars in the shape - like, this is totally a stretched out Citroen DS, right? We can all see that? 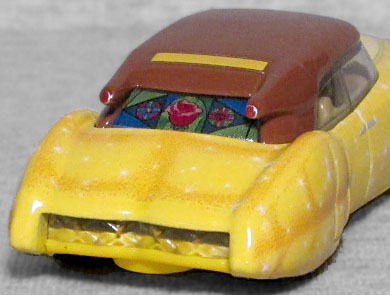 The lighter yellow on the hood represents the neckline of the dress, and the trunk and large rear fenders are scalloped to be the voluminous lower edge of the dress (the painted white spangles suggest this is based on the latest "Disney Princesses" take on the gown, not the actual movie one). Her brown hair is reflected in the roof, logically, but the two little spikes pointing off the back can be seen as the way Belle tucks her hair back behind her ears. The headlights are simply painted on, not sculpted, as is the badge on the hood - a red rose, of course. Beast's rose is also referenced in the rear window, which almost looks like stained glass. And if you look inside, the texture of the seats can call to mind shelves of books, exxactly the thing that would be inside Belle's head.

Belle has translated to the Hot Wheels Disney Character Cars line very well, with a car that's feminine but sturdy, just like the girl herself. I probably wouldn't have been interested in her just by herself, but I'm rolling the dice that there will be a matching Beast soon enough.