If you've read page one of this review, you know that Belle was part of Disney Character Cars Series 2, the line of Hot Wheels that takes famous pop culture icons and artistically reimagines what they would look like if they lived in the Cars universe. 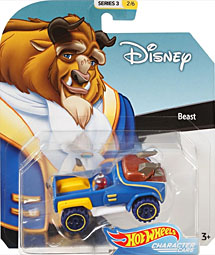 Belle was part of Series 2, and Beast is part of Series 3 - not a long wait at all! The back of the card still shows only two series of toys now: Series 1 has been bumped off the top, which is a much better way of doing things than just printing increasingly smaller images of the characters and their cars.

In the 18th century version of the story, la Bête is a perfect gentleman the whole time, and it's la Belle's storyarc to learn to accept him as he is. Disney may have given their Beauty an "I want" song (namely: adventure in the great wide somewhere), the narrative growth belongs entirely to the once and future prince. And if the Belle Character Car had represented her street clothes, Beast's could have just been his shirt and cape combo; but since she's in her ballgown, he's wearing his dress coat.

For a powerful brute like Beast, turning him into a burly pick-up truck makes great sense! the bulk of the body is a nice royal blue, with a few flashes of white like the shirt he wore under it. The fenders over the back wheels are bright yellow (as is the engine area if you look past the front wheels). 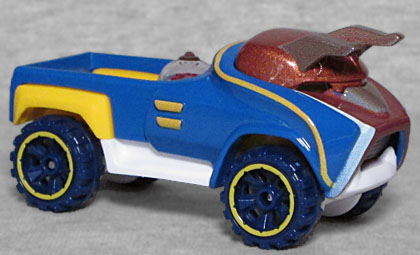 There are yellow details in the mid-body that represent buttons and buttonholes - dots on the left side, lines on the right. The yellow rims on the tires could be seen as the stripes on Beast's pants, but why are the tires dark blue instead of black? You can easily see the collar of Beast's coat going around behind his head, and oh boy, that head! Or cab, I suppose. It's a reddish brown, like his fur, with a narrow windshield acting as eyes, a bump for the nose, and then a mouth formed by a white bumper in front of a black grill. Beautiful! There are even horns on the roof.

The greatest detail, though, is found in the back. Like Beast Boy, this truck is carrying some cargo: a translucent red rose in a glass jar! The idea to make Beast into the film's central character came from lyricist Howard Ashman - 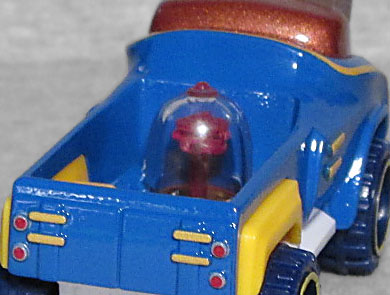 and once you learn Ashman was an openly gay man living in Ronald Reagan's America and that he died of AIDS a few months before the film was completed, it's not difficult to recognize the metaphor of someone living under a curse that was bringing sorrow to everyone who loved him, with the rose basically serving as a magical hourglass counting down to his own sad end. (Seriously, go read the lyrics Ashman wrote for Gaston in "Kill the Beast" - it's a jab at the stigma of being HIV-positive back then, and not even a subtle one.) The translucent plastic is a nice attempt to create the magical glow seen in the movie, but it sits so far down in the bed of the truck that very little light will get to it.

Beast is a pretty cool Character Car in his own right, but just like in the movie, being with Belle makes him better.