Another week, another haul. This was a nice cross section of surprises, good luck, and frustrating obligation. 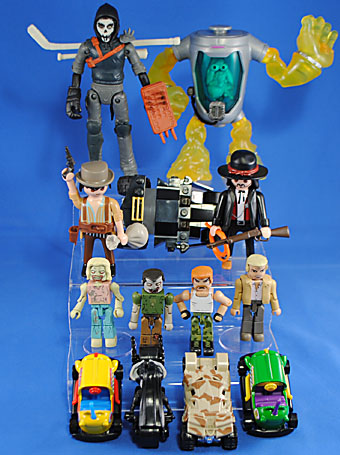 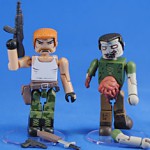 This is definitely the more appealing of the TRU Series 5 exclusives. Abraham is a pretty good looking Minimate and between the undershirt and ginger handlebar 'stache he's pretty unique looking. Obviously the format keeps him from being quite as physically intimidating as he in the comics, but he comes with a machine gun, a handgun and a big knife - the latter two fit in holsters on the belt, though the sheath is a separate piece attached by a tiny peg and a hint of glue so mine popped right off as soon as I tried inserting the knife. In a really nice bit of attention to detail, his waist is fully painted under the gun-belt. The Military Zombie is pretty nice too, coming with interchangeable normal and severed arms allow for multiple variations. He has a waist piece with a big bundle of intestines popping out and, much like Abraham, under that is a fully detailed waist. 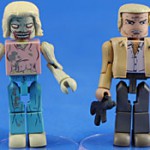 This storyline felt like filler until Kirkman could get to a bigger "one step forward, two steps back" story (the latter is the kind of story that has ultimately killed my interest in the comic/franchise). Eugene was a fairly weak point in the saga and the figure is just as bland. The Emaciated Zombie is another solid entry in the undead horde, though the pastel clothes seem to soften the "character" quite a bit. Aside from the good, decayed deco she gets arms that are detailed with fairly heavy wrinkles and for whatever reason both forearms pop off at the elbows with great ease. I really only got this set because of its exclusivity and banking on my tendency for completism but even counting both those justifications there is exceptionally little to get excited about here. 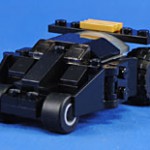 This is a very exciting release that kind of came out of nowhere, particularly since the Nolan-verse is definitively behind us, but it's really a great polybag set. I know I generally hate on Lego cars but I really dig micro-scale versions of recognizable things so this is a great companion piece to the previous Batmobile. The look of the Tumbler is captured pretty well considering the size, and while there are some cheats in the design there is some nice cleverness (like the fins next to the front wheels and the wheel-well for the jet exhaust on the back. This is a Target exclusive set and so far seems to be stocked fairly uniformly at the checkout stand. That makes it easy to miss but also suggests it could be available for a year or two, and with such a great build full of plenty good bricks there ain't nothing wrong with that. 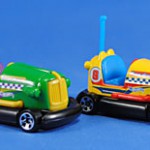 I got the blue "Bump Around" car partly because it is such a fun little idea and partly in hopes that they would be re-issuing it in alternate colors because, hey, the only thing more fun than a neat design is that same design in multiple looks (for instance my first Hot Wheels mini-collection: the Swamp Buggy). Well, the yellow version has been available for a couple months now but the green one is fresh out, and three colors makes a collection so in I bought! I really do get a kick out of the bumper car theme here and they look great, really nailing that carnival feel with the complementary colors of the painted shell and plastic interior. Now we just need a red-shell one to complete the primary colors, though and orange and purple would be quite welcome but frankly they should just complete the ROYGBIV color wheel with these. 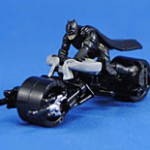 WELL... pure dumb luck... and here is the Hot Wheels Batpod featuring a Batman figure riding it! It's part of a separate, $2 or $2.50 line of bikes and riders. I had written off ever finding this set so I was particularly jazzed about finding the regular Hot Wheels release last week, but now... well, I guess I get two. The batpod is 100% identical to the standard release so only Batman makes it special. Considering the tiny size he's pretty well sculpted and the very minimal paint, beige for the mouth and just a dab of gold on either side of the waist for his belt, is good enough. The Bat-Pod's kneepads and foot pedals are sculpted onto Batman, and though he is fully removable he fits on and lines up pretty well with the elements of the bike. Even at twice the price this is the version to get, but as a result odds are it's twice as hard to find. 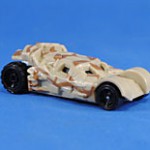 I had no idea this was coming out but there it hung on the front of a peg when I walked past the aisle in a local TRU so, baddabing baddafanniesyouraunt. The shell is unfortunately just plastic and it has front wheel covers which is kind of weird since the cover-less wheels are a signature part of the Tumbler's look. My guess is that they're there to keep the wheels from breaking off during play, but I'm not convinced they're necessary (hell, the Carbonator had free front wheels). At least the back wheels are properly over-sized and there is a pretty neat "middle layer," with some sculpted interior details and the jet exhaust, which is vac metalized. This isn't great but it is worth a dollar. I wonder if and/or hope that they do the other cool looking versions from Dark Knight Rises with the various missile launchers. 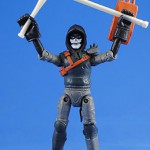 My initial reaction to modern Casey Jones was an eye-roll and a yawn, but he's grown on me a bit, particularly after getting him in hand - he's a better toys than I expected from early photos. Balljointed shoulders and hips with hinged elbows and knees plus swivel wrists and head give him 11 points of articulation making him one of the more poseable figures in the line (even though the hinge joints don't have as good of range as one would expect). He comes with a baseball bat, a hockey stick and a hockey mask. All three three are cast in a bone-ish off-white. I'm just not super crazy about the "emo" look, though my biggest complaint is with the skull face paint. It feels a bit overkill probably because the mask is a generic one with a skull painted on it too. "Oh geez... there's Casey Jones over there... just painting skulls on things." I do really, really like the skull pattern on the mask though and am fairly jazzed they're releasing that as a roleplay item, but by the same token it's a little heartbreaking because I LOVE the classic, super angular mask and feel like we've lost our chance at having a roleplay item of that. 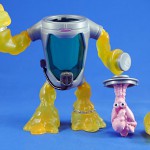 I've really liked this design from the word "go." In fact, I dig it so much this is probably my most desired figure in the line after the four turtles. It did kind of bug me that the classic Mutagen Man didn't have much of a visual tie to Mutagen so I dig the implied sense of this one being a canister with Mutagen arms and legs. They're cast in translucent yellow with a nice orange spray for some depth and detail and all four limbs attach to the canister with pretty good balljoints. Both wrists have swivel cuts too. The minimal but strong articulation makes him more pose-able than expected, and the left hand can pop off. It's hollow and has four holes in its palm-pores - thus you can fill it with mutagen and have drip out of his hand! I definitely plan to get a second one so that I can keep his tank full of glow-stick juice and other kooky stuff. The only thing I might complain about is that the guts stack is a little too consolidated and soft in detail, but it's still good enough, especially in light of the other strengths of the figure. 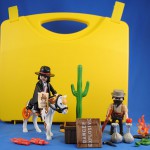 Here's another awesome new release I had no idea about until stumbling upon it! It runs for about $13 and is a great starter or augmenter set for the Western theme, of which I am so enthralled. You get a Sheriff, a Bandit, a horse, a cactus, a snake, a campfire, a crate, a Wanted poster, two pistols, a gun-belt, a Winchester rifle, a double barreled rifle, a coiled rope, three batches of dynamite and two sacks of gold/treasure/dreams! There are even a holster and a clip on the saddle for the Winchester and the rope! I mean, this set has it all! I love, love, love the Bandit figure - I just really wish they'd cool it on the "angry eye brows" because they really limit the choices of character types. My only real complaint with the set is the utterly ridiculous chin-stripe beard thing on the Sheriff - it's... ugh, so ridiculous. On the plus side, though, this set comes in a new style of carrying case! It's all solid/opaque plastic and has NO compartments inside which makes it much, much more useful that the previous version, so that's cool too!

9 Responses to Rustin's Spoils of the Week #126