Carol Danvers becomes one of the universe's most powerful heroes, 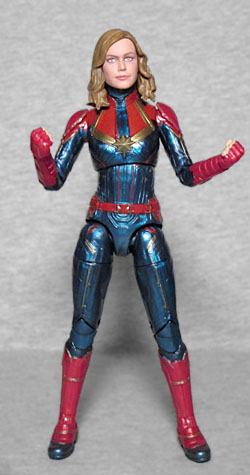 Captain Marvel, when Earth is caught in the middle of a galactic war between two alien races.

As mentioned in today's review, the Captain Marvel toyline features two Captains Marvel. While the one we gave the full review to had an aviator jacket (and an accessory and a part of the Kree Sentry BAF), this one is just her in her Kree battle suit. It honestly does do a fairly nice job of adapting her comic costume to the live-action style. (And side note: how much of the nakedly misogynistic hatred for this film online, do you think, is rooted in nerds' anger that Marvel changed her out of the black bathing suit in the first place?) The suit keeps the classic red-and-blue look, with the gold star on the chest and the stripes running out to the shoulders from it, but manages to look more like armor than just a cool costume, thanks to the thin seams running all over the blue sections and the pads protecting the shoulders. The blue soles on her boots make it look like she's wearing old-fashioned gaiters, and she's traded her sash for a real belt.

The figure includes alternate hands (either fists or flat, fingers-splayed hands) and two heads: one showing Carol's face, and the other with her helmet and mohawk. The likeness here looks much more like Brie Larson than the other version's Leslie Knope head, and the hair is longer and falls straight down instead of off to the side. And the one with the mohawk shows her smiling (which literally was one of the things the MRA idiots complained about - that she wasn't smiling enough for them. There is no limit to the depth of these morons' clueless stupidity.) 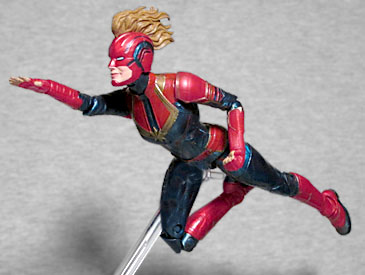 The hair on the mohawk points back more than up; and of course, because this is a Hasbro figure and not Mattel, she can actually look up for a flying pose.

This figure is strange. It's the "vanilla" version of the character, but doesn't include any part of the Build-A-Figure. Were the molds that expensive? And if we're not getting a BAF piece, why no energy effects for her hands? I tell ya, if this figure ends up appearing in a two-pack sometime in the near future, I'm gonna be mad I got her alone. At least you can swap parts around between this Carol and the other one.