As mentioned in today's DC Multiverse Vixen review, the character's comic was cancelled before the first issue was even published. Here's the cover that never saw the light of day: 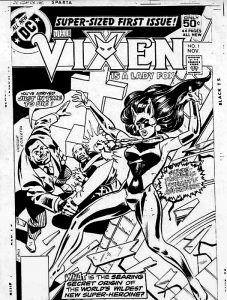 That costume survived until her first appearance in Action Comics #521, but she did eventually start dressing better.

This entry was posted in addendums, comics, DC and tagged Justice League. Bookmark the permalink.