There are (currently) 11 teams in the Transformers BotBots world. But this figure comes from Series 1, when there were only eight. The Sugar Shocks had two stores in the first wing of the mall - on Level 1 and Level 3 - but Sippy Slurps could be found splashing around in the fountain.

As one of our cherished regular readers pointed out, the idea of "losing" a hamburger 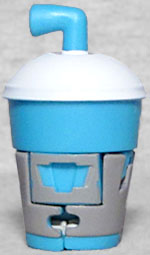 makes no sense. It would make a lot more sense to say someone had forgotten their drink, but that would still most likely end up in the trash, not the lost and found. And anyway, this big blue cup isn't part of the Lost Bots. Although the art shows the cup with a flat lid, like a soda, the toy's lid is a dome, suggesting that it's a slushie. The cup itself is blue, though the gray stripe in the middle doesn't run all the way around: it stops when you get to the back.

It's simple to convert BotBots: in this case, you lift the top to reveal the face, spread the arms, and lower the legs. Well, the instructions are simple, the process is a little tough, because it's hard to get ahold of the arms or legs to get them moving.

Sippy Slurps is unbelievably chill, probably because she's taken too much ice to the brain. She always moves at the same mellow speed and helps other bots chill out: 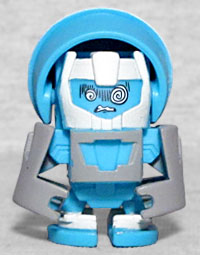 they get brain freeze from touching her!

Sippy is a cute little bot. Her white helmet is typically "Transformers-ish," with various bits sticking up off the top, but she has wild, swirling eyes and an uncomfortable grimace, suggesting the pain of sphenopalatine ganglioneuralgia - brain freeze. Your brain can't actually feel pain, but the meninges that covers it can: when you eat or drink something cold, your internal carotoid artery and anterior cerebral artery contract to stay warm, and that sudden change is interpreted as pain. Press your tongue against the roof of your mouth to warm up the blood vessels and the pain will stop. Sippy Slurps doesn't really have anything in the way of articulation, but her molded hands make the arms look better than just stumps, and there's an inset shape in her chest to break up the smooth lines. 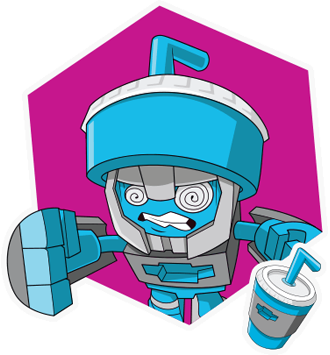 Sippy Slurps is available blind-packed, as #05, or in two Series 1 multipacks: a Sugar Shocks 5-pack, or a Greaser Gang 8-pack.