Back during Series 2, the Transformers BotBots are divided into 11 teams, based on what store in the mall they hail from. The west wing of the mall had two restaurants, one on the ground floor and one on the second floor, and both were home to members of the Greaser Gang. Hawt Mess is upstairs.

In the earliest Spanish dictionaries, the word "taco" was defined as a ramrod, like you would use to load a musket or something. From there, the term transferred 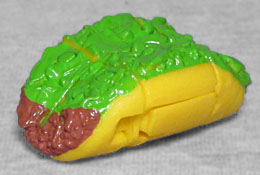 from the rod to the wadding it was loading, before moving on to mean the light meal you'd eat early in the day to fill you up, and finally the typical food that was eaten to do so. Judging by the color of the shell, this is a taco dorado, or fried golden taco - in other words, "hard." Fried taco shells had been around for decades when New York restaurateur Juvenico Maldonado filed patent #2,506,305 in 1947 for a fried-shell mold, putting tacos on the path to fast food ubiquity. There's no sculptural difference here between the ground meat and the lettuce topping it, only paint telling us which is which. 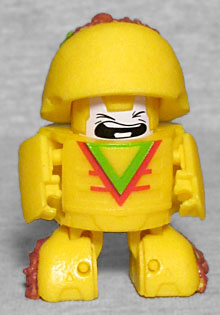 Hawt Mess can't. Keep it. Together. She's a sloppy bot who's stuffed to the brim with refried chaos. This certified disaster is so full of beans, she can't go anywhere without leaving a trail of chili behind.

This is a cute little robot, witha rounded torso, big chunky feet, and a red-and-green pattern on the chest that makes it look like she's wearing a serape. The official art makes her face look queasy, like she's going to be sick, but the toy's face appears to be in higher spirits. Unless she's shouting in pain? The only articulation to be found are swivels at the shoulders, though you could tip her "hat" down over her face if you were so inclined. 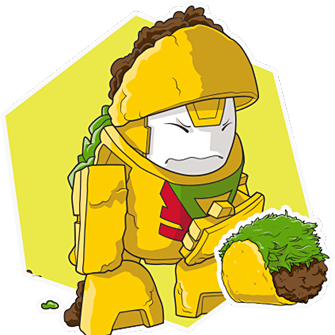 Hawt Mess is available in a Shed Heads 5-pack, or a Spoiled Rottens 8-pack. The mold has also been repainted twice.