Hasbro brought a Transformers BotBots exclusive with them to San Diego Comic-Con this year: the "Con Crew" set, which features 'bots from three different factions: the Meet n' Greets, the Line League, and the Fantastic Fuelers. And since it's almost the time when SDCC would have been if Americans weren't too stupid to wear a mask, we should probably finish reviewing them all at some point.

It's fitting that this SDCC set would include a fish taco, because 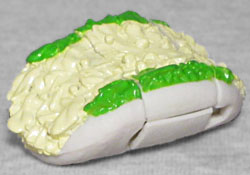 while the epicenter of tacos de pescado was Ensenada, Mexico, they moved north in teh early '80s to become the unofficial official dish of San Diego. Fish tacos are generally served in soft shells, which is why the outside of this one is a pale gray-beige. The filling has different paint masks than Hawt Mess did, with the lettuce confined to the sides rather than covering the top - such are the advantages of a sculpt that's visually indistinguished! Usually you'd think of fish strips in a taco, but this looks more shredded. Like tuna salad. 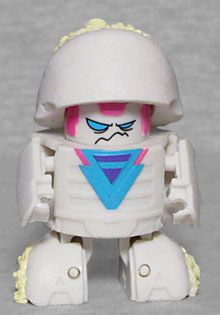 A special session with long-time avoided fishy taco, Sumthin' Fishy. This expired snack has seen it all over the many days he's been sitting out at the con. Unwanted, and kinda gross, he'll finally share his wisdom.

Sumthin' Fishy has a disgruntled, sour look on his face, matching the description of his personality in the bio. The robot mode has a nice shape, but between the light taco shell and the light ocean meat sticking out at the ends, it's a very monochromatic look. Good thing there's pink around the head, and a blue and purple "bib" on the chest. The arms are the only part of the robot that's poseable, able to swivel at the shoulder. 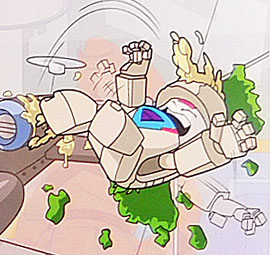 By himself, Sumthin' Fishy isn't that great a design. But as a counterpart to Series 2's Hawt Mess, he makes a nice contrast of styles.