While the members of the Science Alliance are supposedly found in the "science" store, that doesn't make a lot of sense. Because there is no such thing as a science store. A telescope, though? You could easily find one of those at Sharper Image or even a high-end "learning toys" place. The BotBots legacy lives on! 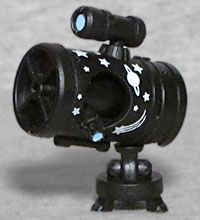 The first known telescope was is from the Netherlands, where eyeglass maker Hans Lippershey, living in the province of Zeeland (surely you've wondered before where New Zealand got its name) attempted to patent the invention in 1608. He wasn't granted the patent, and soon the idea spread all over Europe. Lippershey's design only had 3x magnification, while a large Newtonian telescope like this, with the eyepiece on the side instead of on the end, can be much, much higher. This is a freestanding model, with its own stand, suggesting it's a fairly small device, but it would still be enough to see clearly into the craters on the moon like you were looking into the next room.

BotBots convert easily. Rotate the body tube up over the stand, pull the right arm out, rotate both arms down, and turn the top until you reveal the face.

Professor Scope is always looking for her next discovery. When this astronomer bot looks to the night sky she sees undiscovered constellations waiting to be named! In fact, it's become quite an obsession. Those three dots, that's Boticus Maximus, and next to it is the Little Zapper and Big Zapper, 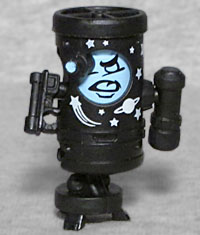 and over there is Galumpacus, and, she's still thinking on that one right there.

The light blue face is a blatant reference to Georges Méliès' Le Voyage Dans la Lune (which you may know from The Simpsons, Futurama, or even the Smashing Pumpkins' video for "Tonight, Tonight"), with the telescope's eyepiece standing in for the rocket - even the eyebrow and the off-center mouth come directly from the film. The body isn't quite aligned with the feet, resting instead a bit to the side, but if you turn the base the right way it will help hide that. The stars, planets, and comets painted around the facial opening help get the idea across, even if they do feel like some scientist left their kid alone in the observatory with a pack of glow-in-the-dark ceiling stickers. 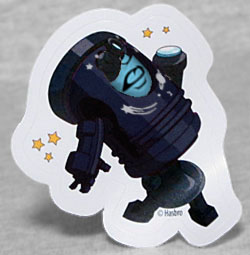 Professor Scope is a Series 5 repaint of Series 4's Starscope, and is available in a Los Deliciosos 5-pack, or a Frequent Flyers 8-pack.