Flippin' through Previews - May '13 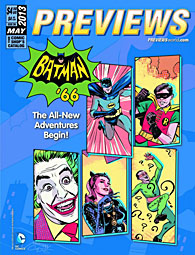 It's time once again to thumb through the toy section of this month's Previews, and see what goodies we can uncover. Scheduled to start shipping in July.

DC Direct has a single Captain Cold action figure on page 154, as well as two three-packs of re-releases: Trinity War with New 52 Batman, Superman and Wonder Woman, and Hush with Joker, Harley Quinn and Stealth Batman.

The giant Solomon Grundy we saw at Toy Fair is listed on page 155! And amazingly, he's only $90.

We don't understand the appeal of the Aardman DC figures, but there's a five-pack of them on page 157.

McFarlane has finally released the first images of their Assassin's Creed figures, and they don't look too bad. Check out page 230 if you don't believe us.

DST's Star Trek Select finally gets to the good era, bringing us Captain Picard. See him blasting Borg on page 411.

Similarly, page 412 has Universal Select versions of Quasimodo and Dr. Jeckyll, both played by Lon Chaney.

The Minimates show up on pages 414/5, with Thundercats, Walking Dead, and the new Thor movie.

There are GI Joe vinyl mini-figures on page 422, but at $13 each, they seem expensive. There are Transformers on page 424, but they cost a dollar more!

Godzilla fans will like page 425, with both 6" and 11" collectible figures.

Page 426 has Marvel Universe and Iron man Legends toys, but nothing we didn't already know about.