Once upon a time, the Transformers BotBots came with inserts that showed off the mall and where all their stores could be found. These days a magic shop isn't something you'd really find in a mall, but I just had a sudden flashback to the mall I went to as a kid, which had a rickety "upstairs" section in the middle (added several years after the mall's opening), that had like three stores in it, including a dark wood-paneled magic/joke shop. So I imagine that's where the Magic Tricksters can be found. 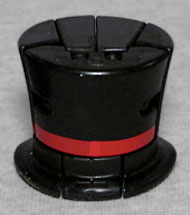 the caricature of upper-class wealth they still are today (buying one would cost about a month's salary). They were originally made from beaver fur, though that was eventually replaced by silk. Their association with fancy dress (and their ability to serve as a handy hiding place) made them the perfect accessory for magicians.

This topper is a little over 1" tall, with sloping sides and a red band around its black body. The bottom is flat, not hollow, so unfortunately you won't be able to plop it on the head of any other figures for dress-up fun.

BotBots no longer come with instructions, which is a little bit of a problem here: if you skip a certain step, the toy won't stand. You have to lift the ears, spread the body of the hat to reveal the robot, and hinge the feet down... but then you also have to slide the entire upper body forward, or she'll roll over like an over-burdened rocking chair.

Introducing the incredible, the marvelous, the spectacular... 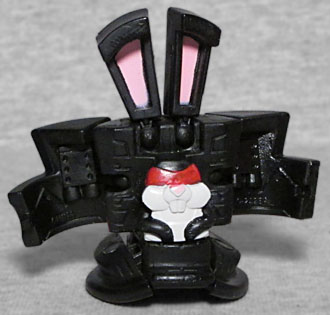 the Great Mumbo Bumblo! She will perform a trick that will amaze and astound you! The most incredible, most remarkable trick any magician bot has ever attempted! The Great Mumbo Bumblo will pull a rabbit out of a hat! Observe as she converts from hat mode to robot mode. TA-DA!

A hat that turns into a rabbot is a really clever concept, but holy hell does the execution need some work! The little bunny face is cute, with its red visor, and the designers made the ears slightly asymmetrical. She holds her arms in front of her, and there are sculpted toes on the feet, so you can be sure which way is "forward." Small molded mechanical details keep the kibble from looking boring. 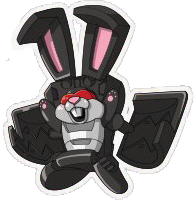 The Great Mumbo Bumblo is available either in a Magic Tricksters 5-pack, or as #19 in the blind-packs.