The east wing of the BotBots' mall features a holiday store, hidden in a back corner on the ground floor. But not all the Season's Greeters will be located therein; there's also a bit of a construction zone up on the third floor, and that's where you'll find Meltz Down dancing with his friends. 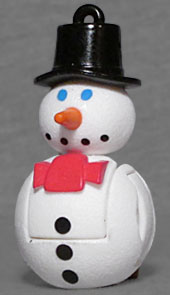 If you think it's even weirder that a mall would sell a snowman than it is that a mall would sell a gravestone, worry not: the small ring on top of the hat makes it clear that this is not an actual snowman, but rather an ornament of a snowman! While Western snowmen traditionally have three body segments - a head, a chest, and a butt - Japanese snowmen just have two, like this ornament. Intentional homage to Transformers' country of origin, or coincidence? The "snow" parts have a rough texture, while the black dots that form the mouth and buttons are smooth - the blue eyes, too. He wears a black top hat and a blocky red bow tie, and has a pointy orange nose representing a carrot.

BotBots convert easily. All you need to do here is fold down some little legs (which, with careful balancing, could keep the snowman standing by itself), pull the head down to the side to become an arm, take the other arm out from the side of the body, and slide back a flap revealing the face.

No bot loves winter more than Meltz Down. 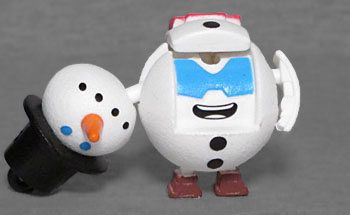 Snow storms, cold winds, and below-freezing temperatures all warm his icy heart... and that makes him nervous. Anything. Warm. Makes him nervous. One look at so much as a candle flame sends him into a total melt down!

Isn't that cute? He thinks he's made of real snow! The "head becomes an arm" thing was weird when Beast Wars did it for their Megatron, and it's even stranger here. You have to use the hat-hand to help keep the figure standing, because the head is so heavy. The eyes are an angular blue visor, and he's got a big smile. 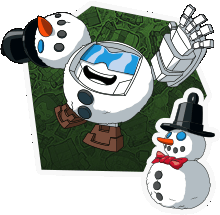 Meltz Down is only available in the Series 3 blind-packs, where he's #13.