The idea behind the Lost Bots is that they're all items who have gotten separated from their teams. So if you look at the west wing of the Transformers BotBots mall, you'll find today's character hanging out by the music store up on the third floor.

As far as "things that can get lost," a watch is more sensical than a hamburger, but why were you taking your watch off at the mall? That's on you, poor-life-choices-person. This abandonned Swag Styler doesn't get much of a disguise, because while the watch does look good, the eventual robot's face is right there visible on the front of the watch. That's... way to not try, Hasbro!

BotBots convert easy. All you have to do here is fold down the legs, and rotate the arms down.

Ol' Tic Toc has been keeping time for longer than she can remember. 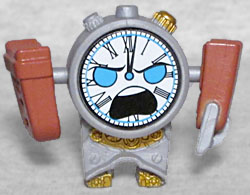 The only problem is that the numbers are on her face, so she's the only one who can't see what time it is!

That must make her very angry, because her face is painted with angled brows and a mouth that's wide open in a yell. This isn't a very inventive robot, by any means, but there's only so much that can be done with something that began life as a watch. The coolest part of the design are all the gears and workings (including an Autobot symbol) molded into the back and interior of the figure. 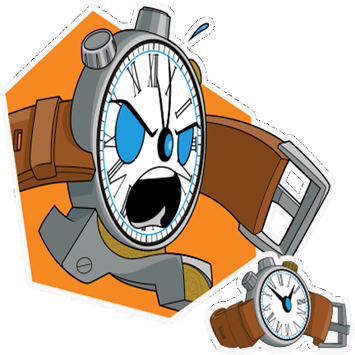 Ol' Tic Toc is available either in a Shed Heads 5-pack or a Spoiled Rottens 8-pack.