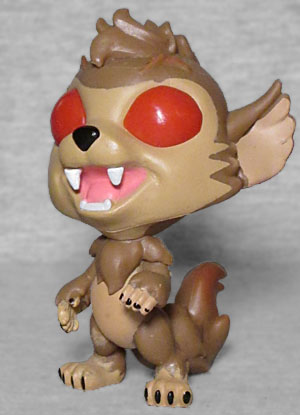 This furry fellow may cause panic in your neighborhood (and lots of barking dogs), especially when he howls during a full moon. But there's nothing to be afraid of... except his endless appetite and ability to sniff out snacks anywhere, anytime.

Yeah that's right, Cryptkins Series 2 is catering directly to me by offering a werewolf pup. It's more "wolf" than "were," with the only particularly human thing about it being that it stands on two legs, with the bushy tail acting as a support to keep its giant head from making it fall over. Oh, I guess it's got thumbs, too; that's not something you expect to see on an animal. The mouth is open slightly in a bit of a grin, and the large ears are pointy. 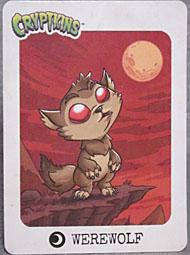 Bagged separately inside the box with each figure is a small card with art of the Cryptkin on one side and biographical facts (well, "facts") on the other: name, full-grown height/weight, descriptions, diet, and habitat and range, with a map of the world to help drive that last one home. Weirdly, Rory's homeland is identified as "Europe," with only that region shaded in on the map. What, are there no American werewolves? I'm pretty sure there's at least one. The art on the front shows the werewolf standing on a cliff and howling at the moon in the red night sky, and both sides of the card are designed to look aged.

The packaging for Series 2 is slightly different from Series 1. 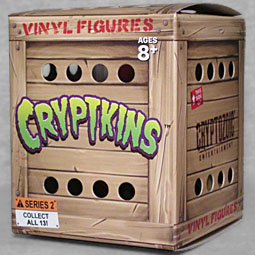 It's still designed like a small shipping crate, 2⅝" x 2½" x 3", with air holes poked in it, and there's still an opaque green bag hiding the figure within. But the "They Do Exist!" slogan is missing from the front and top, the "vinyl figures" descriptor looks more like something stenciled on, the caution stamp on the left side is a different style and the one on the right has been swapped for a Cryptozoic Entertainment logo, there are several "shipping label"-style icons (danger, this side up, etc.) including the one on the front that proclaims this to be Series 2 and invites you to collect all 13. If you just glance at a display in the store, it may appear to be Series 1 leftovers, but it's unique enough if you know what you're looking for. 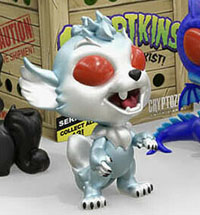 There's a 1:72 variant of the werewolf available, painted pearly blue white and called Adlet. What's an Adlet? It's basically a Greenland Inuit werewolf - a tribe of men with the lower body of a dog. They're said to be the descendants of a woman who refused all her suitors and instead married a dog. You really get the feeling Cryptozoic was just casting about for anything that would let them create a variant more than aiming to immortalize a famous monster.

This entry was posted in blog exclusive review and tagged Cryptkins, Simpsons. Bookmark the permalink.