Ever wonder whose lightsabers General Grievous carries? The 2018 book Star Wars Lightsabers: A Guide to Weapons of the Force has the answers. 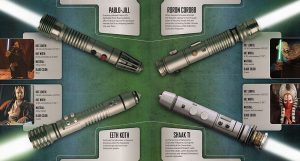 He killed many Jedi (mostly off-screen) and had a massive collection of their lightsabers, but his greatest prizes were the weapons of Pablo-Jill, Roron Corobb, Eeth Koth, and Shaak Ti. Comparing to the book, the sculpt of the accessories included with the Black Series General Grievous toy do line up with those names (though the colors may be different, and before now the only reference for Roron's lightsaber was cartoony):

Grievous claimed Pablo-Jill's lightsaber from floating debris, after Grievous injured him during an intense duel in a collapsing satellite city over Duro.

As the last line of defense for Chancellor Palpatine, during the final battle of the Clone Wars, Grievous ensnared Shaak Ti with electrified cables, which knocked her unconscious and allowed Grievous to steal her lightsaber.

Koth lost his lightsaber to Grievous when the Separatist warlord captured him in the Saleucami system.

When General Grievous stormed the Republic capital, he cut through layers of security forces and Jedi protectors, including Corobb. He was killed by Grievous while defending Chancellor Palpatine.

The most interesting thing about that list is that the inclusion of Skaak Ti and Roron Corobb says the original Cartoon Network Clone Wars microseries is back in canon - the finale, at least.