BotBots Series 4 has given up on including art of the mall where the tribes all live, so we don't know where Milton's candy store would be located, but at least we know he's a member of the Sugar Shocks, one of the groups still hanging around from Series 1. 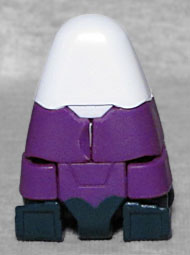 Purple and black dark indigo may seem like a weird choice for a piece of candy corn, but it's a real thing, apparently - it's black licorice flavored. Black licorice candy is flavored with glycyrrhizin, a sweetener derived from the licorice root that can swiftly lower the body's potassium levels, causing muscle weakness, arrhythmia or other heart problems. A candy that could kill you if you eat it? So metal! No wonder it's black! This big rounded triangle is one of the largest BotBots - if he's really made from a piece of candy corn, in real life he'd be one of the smallest.

The conversion is easy, as always: open the panels over the face, roll down the feet, spread the arms, and unfold the tail.

Milton is so emo. The bright and colorful vibe of the Sugar Shocks makes him want to gag. He prefers black. He uses his bat wings to fly off 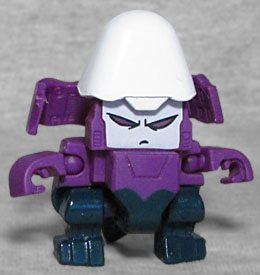 and get away from it all. He'd just rather be alone, you know, contemplating his existence as black liquorish candy corn that came to life after being hit by Energon that can convert into a robot bat and whose name is Milton. It's a lot to think about...

So Sugar Breath was a dragon, but now Milton is a bat? Okay, we can roll with that. It's no stranger than giving him a name that calls to mind famous candymaker Milton Hershey, when Hershey's whole thing was chocolate, not candy corn. Or licorice. The toy's face goes along with the idea that he's more emo than Sasuke, with a tight mouth and angry purple eyes. The stumpy little tail is necessary to keep the heavy figure standing. 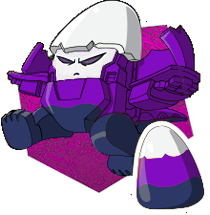 Milton is available in one of the "Claw Machine Surprise Unboxing" sets - the one with Skitter Chatter and The Cobbler in the clear capsules - or blindpacked as #9.