This is what you get when you combine "Power of the Primes" Inferno with four Walgreens Wreck-Gars and one Legends Class Wreck-Gar: 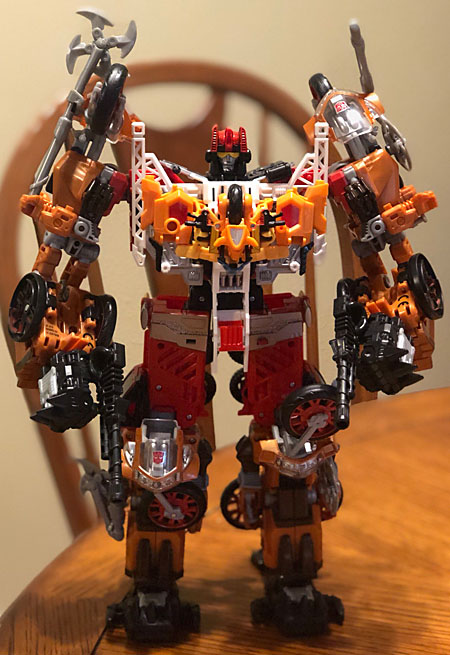 That actually looks pretty good all together - better than they looked alone! His gestalt personality is a cross between MacGuyver and Patrick Star.

Brent eventually came up with names and personalities for the "extra" Wreck-Gars.

let’s say the left arm is Wreck-Gar, right arm is Garborotor, left leg is Crunch'n'Sniff, right leg is Zoombilee Zoom, and the smol guy on the chest is Carl Dan.

Garborotor
Function: Junkion Mall Sheriff
Move over Paul Blart, Garborotor is the new sheriff in town... er, mall! This heroic Junkion takes his 9-to-5 dutes very seriously! As the top guardian of Planet Junk's only shopping mall, he oversees the safety of the trendiest trash in the universe! It's his unique facial hair that makes him so perfectly suited for his job because it twirls in the presence of someone who is lying. Hell hath no fury like Garborotor with a twirled mustache!
Crunch'n'Sniff
Function: Junkion Aerial Recon
Look! Up in sky! Is it a Predacon? Is it an Aerialbot? No! It's Crunch'n'Sniff! This enigmatic Junkion's true identity is the biggest mystery of all on Planet Junk! He flies through the air searching for injustice and dance battles! How he fly by the way? Nobody knows for certain, but some say it's because he ate a Seeker who murdered his pet Earth goose! Others say he ate the goose. We may never know!
Zoombilee Zoom
Function: Junkion Accordion Repairman
Every Junkion knows that if you have an accordion in need of repairs you better take it to Zoombilee Zoom! The only accordion he can't fix is one that isn't broken! Using the sweet melodic powers of accordions allows Zoombilee Zoom to repair almost anything and, as it turns out, combine with his Junkobot teammates into the ultra powerful Dumpster Fire! Look out Decepticons, here comes the polka!
Dan
Function: Dan
Dan is considered by many on the Planet Junk to be the least interesting Junkion and is feared thanks to his ordinariness. His only known natural gift is his attention to detail while filing. Dan became 1/6th of the Junkobot Combiner, Dumpster Fire, after chasing a stray cover letter into the wrong area at the wrong time. Poor Dan.

This entry was posted in customs, Hasbro, lists and tagged Transformers. Bookmark the permalink.