Infants. Can't walk themselves, can't sleep right, can't feed themselves... and even when they start to feed themselves, they still suck at it. So it's off to the Transformers BotBots mall to buy more specialized equipment to keep them from making a giant mess. Though this one isn't with the other Goo Goo Groupies in one of their stores, he's just up on the third floor construction zone.

You know they make sippy cups for adults? They're called "travel mugs"

and, aside from being more insulated, are the same basic concept: instead of a container with a large, gaping hole where the entire contents could come erupting out in case it gets knocked over, there's a lid with a smaller opening to limit how much will come out at once. This is definitely a toddler's version, with big chunky handles on both sides so their indextrous hands can hold onto it, and a series of measuring lines (ounces on the left, milliliters on the right) down the side - cleverly, they're on the side away from the sipping spout, because that would be aimed at the kid, while the measurements are more for whoever would be looking after them. Smart!

BotBots are not difficult to convert. Here, it's just a question of turning the lid around, folding out the legs and tail, rotating the handles back, and flipping over the flap on the top.

Other bots say walking Drippy Pup is like taking a ride down the grossest waterslide, ever. Sure, he's adorable, but the rivers of drool he leaves behind have everyone slipping and sliding all over the place. Be warned: if you take him out 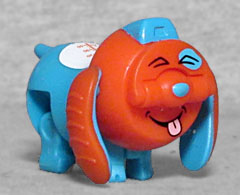 for a walk, bring a mop!

Yes, this robot mode is a puppy, not a person. The cup's handles becoming floppy ears is slightly brilliant, but there's a glaring oversight in the design of the face. When you flip the panel over to reveal it, the eyes are on the part that moves, while the face is on the part that stays put; this means the eyes stick out farther than the mouth does, which is exactly 100% backwards from how a dog works. If they'd painted them the other way around, it would have made for a much better toy. Hopefully if they reuse this mold in the future they can correct that. 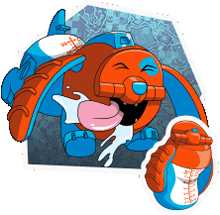 Drippy Pup the sippy cup is only available in the blind-packs, where he's #19 in Series 3.