The third season of Disney XD's Marvel's Spider-Man will be subtitled "Maximum Venom," and will see Spidey fighting off Venomized heroes. The season won't debut until next spring, but Walgreens already has Minimates. 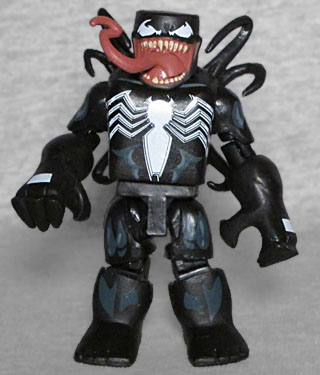 There is, of course, a Venom. It's similar to existing Venom Minimates, with a powerhouse chest, pieces to bulk up the arms and legs, the huge hands, big feet, and even the tendril of symbiote goo to act as an alternate hand. However, the chest cap is a new piece with tendrils whipping off the shoulders and kidneys, and the feet have little sculpted toes instead of just being big smooth boots. The head is fully sculpted with sharp teeth and a long lolling tongue. Even the wrinkles between his (painted) eyes are molded in. This is a far cry from the earliest Venoms! The spider symbol on his chest and back are painted with thiiiiiin lines that make them look like hard 3D elements, rather than just a difference of color.

Venom's first victim (as far as these toys are concerned) 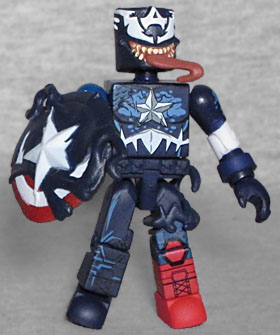 is Captain America. There have been several Venomized Captains America in the comics, in crossovers and what-ifs and variant covers and so forth, but this one doesn't take his design from any of them. This Minimate shows Cap being taken over by the symbiote, with it still spreading around his body: the right arm and left leg are still natural Cap, and the star on the chest is just about to be subsumed; the rest of him is bluey-black alien goo. The left hand is a mold with claws, and there's a piece on his left thigh that represents active tendrils. Even his shield is being Venomized, covered with sculpted symbiote! instead of just being painted, the details on the head - the teeth, the cheeks, the eyes, the ear-wings, the A on the forehead - are molded, and the tongue is a separate piece glued in.

There's a lot more sculpting than expected in this set, but it makes the Minimates look like characters covered in alien symbiotes, rather than just ones painted to look like alien symbiotes.