When you attend a convention, you're going to have a lot of downtime where you're just standing around - whether it's waiting to get into a panel 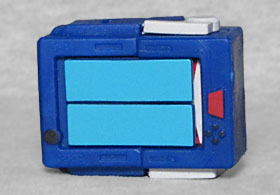 or waiting for the signature/purchase line to move, the one thing you'll never lack is time to stare blankly around you and wish you could be doing something else. That's why a portable game system would be so important! This is functionally just a rectangle with a screen: it's clearly meant to sit on its side (judging by the placement of the D-pad and buttons), but the official art shows it incorrectly sitting upright. The blue colorscheme makes it look kind of like a TARDIS at that point. There's a conspicuous bit of cloth sticking off the back, but pretend that's... a cleaning cloth, maybe?

This is one of the more complex BotBots to convert. You have to rotate up the little white points, pull out the arms and swing them down, pull out the two sections of the screen (one of the tougher parts of the process) and rotate them out of the way for now, fold down the legs, spin the head around, and move the screen-wings up a bit. 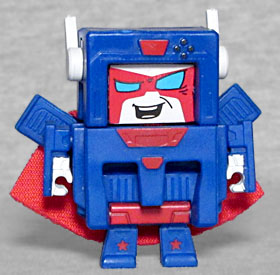 he's already ahead of the game. He'll answer questions about how super-vision, lightning-fast thumbs, and unlimited energy are all you need to crush long lines.

This is the third cosplaying BotBot, putting him in competition with Scribzilla and Coffeemus Prime. He's a superhero, meaning that permanently affixed scrap of cloth is meant to be his cape! The body is mainly blue, with a red bit above the legs acting like trunks, and he's got a red mask painted on his face. The cape is permanently attached, which is why you have to deal with it in the alternate mode. As far as robot modes go, Captain Cartridge is like a Volvo: he's blocky, but he's good. 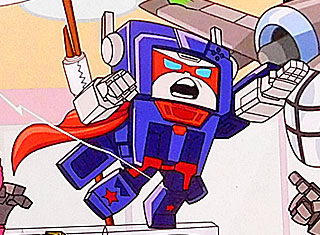 Captain Cartridge was a new mold when this set was released, but only due to shipping schedules: this is the same mold as a Series 3 'bot, D-Pad Chad, but Series 3 wasn't out by the time of SDCC. And anyway, the colors were different and he lacked a cape, so Cap is still at least somewhat unique.