Remeber when there were only eight Transformers BotBots factions? It was just last year, and now we've got nearly three times as many! The Techie Team has been around since the start, meaning you can find Skillz Punk dancing like a fool on Level 2 in the first wing of the mall.

This, youngsters, is a videogame cartridge, the way games used to be sold before companies' idea of a "physical copy" was "selling you a plastic case 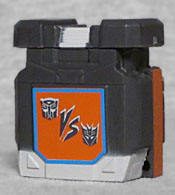 with a Steam download code inside." Back then, when you bought a game you actually owned it, you weren't just renting it at the whim of the publisher. There were no patches, no DLC, no microtransactions, no subscriptions or <Jim Sterling voice>"live services"</Jim Sterling voice>... just a game, hard-coded inside a slab of plastic. This slab of plastic is dark grey with a stripe at the bottom that's nearly white, and the orange label onthe front suggests the game it contains is something about Autobots vs. Decepticons, making this one of the few BotBots to use those faction symbols. One side of the cartridge has a blue stripe and the other orange, which lends it a real "Nintendo Switch" feeling.

Converting the toy isn't complicated, but it can be tough: raising the head and folding down the feet are easy enough, but it can be a trial to get the arms to pull out to the sides.

Call him classic. Call him retro. Just don't call him a lamer gamer. 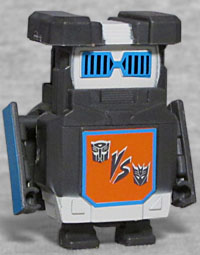 This bot has mad skillz. Other bots may look flashier, but Skillz Punk still owns the leaderboards. He can go head to head with anyone and dominate.

God, that bio is almost as bad as the future-slang from Ready Player One. Skillz Punk isn't a particularly interesting robot, either, little more than a block with limbs - nothing clever happens when changing the cart into a body. His only facial features are his blue... glasses? Eyes? Whatever. He doesn't even get the mouth shown on the official art. Be careful, because unless you push his legs far enough forward to click into place, they'll fold under his weight and he won't be able to stand up. 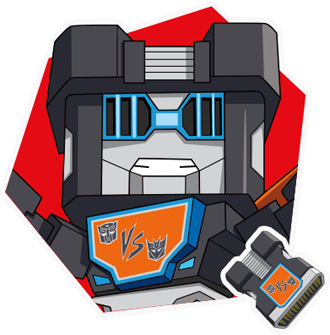 Skillz Punk was available blind-packed, in the same five-pack as Burgertron, or in three of the Arcade Renegades sets (there remolded to make the arms easier to extract).