Lorelei is an Asgaardian, one of a race of beings who have 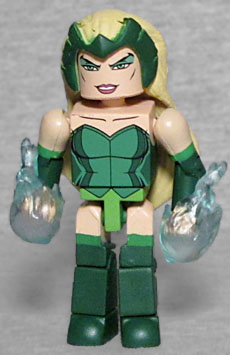 appeared in the mythology of Earth. Her powers of persuasion make anyone do her bidding.

This is the second Enchantress Minimate, though since this one is based on the Avengers Assemble cartoon, her design is slightly different from the comic: mainly, she doesn't wear a skirt. Maybe she was under the impression that the reason Thor isn't interested in her was she was wearing too many clothes? Still, she's a blonde woman wearing lots of green, and has a big silly headdress, so she's recognizable. Her corset is a darker green than her panties, but is done in several different shades to create the pattern seen on the show. To show off her magic powers, the set includes two translucent blue fireballs to fit onto her hands. That works well!

A frequent accomplice of the Enchantress, Skurge is 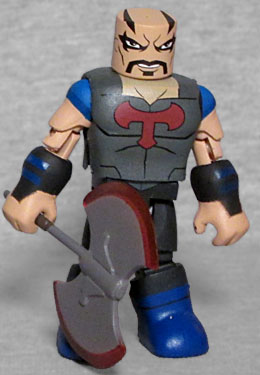 an immortal warrior, an expert in all forms of combat who wields a formidable axe.

On the top of this set's packaging, where the text usually says "interchangeable parts" or "fully poseable" or something, it proudly proclaims "includes Skurge's axe!" which normally wouldn't be worth mentioning, but, well, you remember what happened last time Walgreens carried a Skurge Minimate. The axe is a nice design, almost as big as a Minimate body by itself and cast from translucent red plastic so the edges can appear to glow, but the handle is so thin the figure can't hold it well - not with those oversized "powerhouse" hands. Because the character is huge, the Minimate gets the whole set of powerhouse pieces: chest, shoulders, forearms/hands, waist cap, thighs, and boots. The left elbow on mine is so loose the arm can't even stay bent at all.