Tucked into a ground-floor corner in the third part of the BotBots' mall is a seasonal store that's making the transition from Halloween displays to Christmas. It's got to be hard for shoppers to get in there, though, because Wizengreen is sitting right in the center of the doorway. 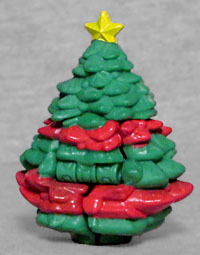 There are lots of rumors and myths about the history of Christmas trees (no, the tradition of covering them in candles was not started by Martin Luther, it was being done at least 40 years before he was even born), but it's definitely known that they come from a medieval German tradition of performing a play about Adam and Eve the day before Christmas - the play featured a tree with apples, which evolved over time into decorative balls. This tree doesn't have any balls, just red stripes (meant to represent tinsel, presumably) and a yellow star on top. Although Queen Victoria's husband is generally credited with bringing Christmas trees to England, the first was put up in 1800 at a party Queen Charlotte gave for children.

Most Christmas trees change by drying out and dropping all their needles. This Christmas tree changes by opening the sides, folding down a flap in the front, pulling out the arms, and bringing down the legs.

Have you heard the tale of Wizengreen? Legend has it 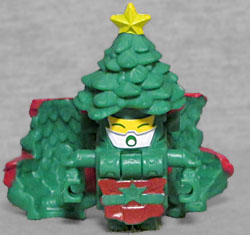 that once a year an eternal and magical wizard tree named Wizengreen comes and uses his great powers to conjure gifts. It is believed that in a single night he brings those gifts to every bot who made his list.

So Wizengreen is half tree, half Santa? Really leaning into those Odin connections, I see. Calling this BotBot a wizard works with the design, since the top of the tree is pointy like a wizard's hat and the flaps behind him could stand in for a cape. The interior of this is sculpted to look like foliage, not robotics. Why it looks like deciduous leaves instead of pine needles is a mystery. The flap on the front looks like a present, and the fact that his mouth is open makes him look like he's singing. 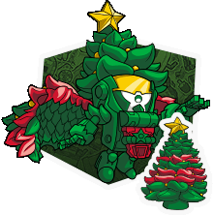