Animal experiment Rocket is a member of the Guardians of 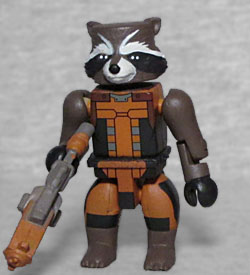 the Galaxy, a ragtag group of adventurers who protect the galaxy from any and all threats.

Rocket Raccoon has had three (non-accessory) Minimates from three different movies, but this is the first time I've gotten him. He uses an extra-small torso block and the "child" arms, but his legs are unique to him (necessitating a unique disc base for him to stand on) and there's a piece that slips into the waist to give him his tail. The head is fully sculpted, with furry cheeks and small ears and his little snout, but the underlying shape is still a typical Minimate cylinder. This is the only version of Rocket wearing his orange suit, like the first movie, and he's armed with a blaster that's nearly larger than he is. 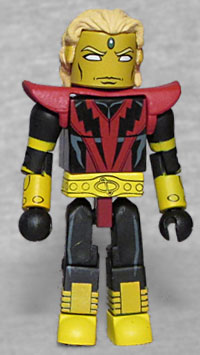 Adam Warlock is an [sic] powerful being created by the Universal Believers. He bears the Soul Gem upon his head, and possesses unbelievable abilities that could save the universe or destroy it.

The Marvel cartoons are generally aimed at cashing in on the movies' successes, so it's brave of Guardians of the Galaxy to introduce their Adam Warlock before the third movie does. What if James Gunn takes Adam in an unexpected direction, like he did with Ego, the Living Planet? The cartoon design is influenced by Warlock's modern costume, with black and red lightning bolt patterns on the chest, but also big flared shoulderpads and some Egyptian-influenced boots, wristbands, and belt in gold. His skin is gold in the same way the Sovereign race's was in GotG vol. 2, and he has the green Soul Gem on his forehead.

This entry was posted in Art Asylum, Marvel, MMMR, Walgreens and tagged Guardians of the Galaxy, Minimates. Bookmark the permalink.