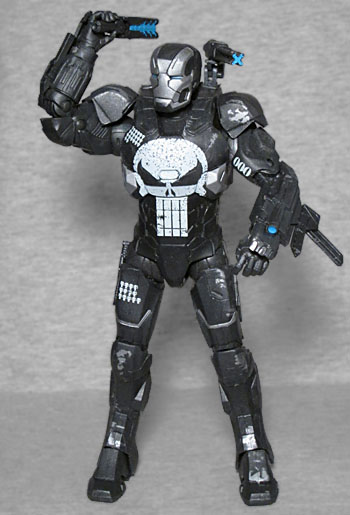 After the fall of War Machine, Frank Castle acquires the highly weaponized armor and makes it his own.

This figure is, simply by looking at its design, pretty self explanatory: "War Machine, but Punisher." But how? A group of rogue SHIELD Agents tried destabilizing the government of one of Marvel's fictional Eastern European countries (Chernaya), and things turned bloody. Needing someone who could stop them, help the local citizens, and clean things up, Nick Fury (Jr.) loans Frank the War Machine armor, since Rhodey was briefly dead at the time. He took out the corrupt agents and the would-be dictator, but then ignored Fury's orders to return the armor, bringing it back home to his normal war on crime. 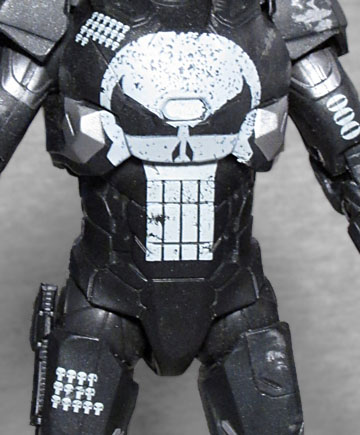 This figure is a simple repaint of the Civil War War Machine - come on, guys, just because the character was drawn to look like Jon Bernthal, it doesn't mean we was wearing an MCU suit. Of course, Hasbro has only ever made two comic-based War Machines in this scale, and neither would really suit this figure as well as the movie armor does.

The suit is still a dark grey with a little bit of silver, but Frank took the time to paint his skull logo on it. The number on the left arm now reads 000 instead of 003, and he's got kill tallies (in the form of more little skulls) on his chest and leg. They could have lightened the facemask a bit, so it would look like a skull too.

Punisher War Machine has all the same accessories 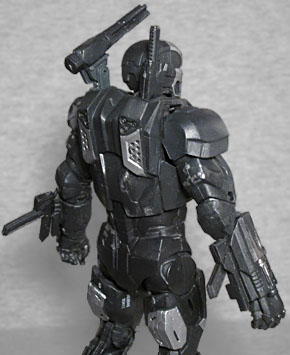 as non-Punisher War Machine: closed fists, a shoulder gun, a baton, two "retracted" versions of the same things that can plug into his shoulders, and a pair of machine guns that either plug into the underside of the forearms or, with their ammo clips folded away, into notches on his thighs. You know what he doesn't have, though? A Punisher head! Come on, that should be a no-brainer! Wonder if the balljoint is sized properly to let you swap your own on?

Offering this as an exclusive is a good way to get an interesting design out without having to take up a slot in a real series, especially since it's such an uncomplicated repaint. It's certainly the most interesting "Fan Channel" exclusive yet.