The scene: San Diego Comic-Con, upstairs where all the mid-sized panels are held. It was the top of the hour, so the panels had just ended, and fans headed back down to the show floor were crowding the hallway. Maybe there was a cosplayer posing for a photo at the far end, who knows?

A security guard and someone who looked like you searched "personal assistant" on a stock photo site were trying to nudge their way through the crowd.

They weren't making a lot of progress, though. And then, among the excited murmuring from the people behind you, you hear a voice you'd recognize anywhere:

"Boy, these are some crowds, aren't they!" It's Stan Lee, being escorted through the building. With the majority of the mob facing down the hall away from him, he cracks a self-deprecating joke: "All these people, trying their hardest to run away from having to listen to me talk!" We all laugh. A fan somewhere behind the respectful bubble of space tells him that would never happen.

"Is everybody enjoying the show?" He asks everyone, but he somehow makes it feel like he's talking just to you.

He puts on that big, practiced smile of his and says "Gee, that's terrific!" And then the crowds thin out enough that his entourage can whisk him away, and he's gone. You never even thought to get your camera out, but why bother? It's not like you're going to forget it.

This shared exclusive is simply the cancelled Build-A-Figure with some new accessories. Which means he's basically a repainted Bruce Banner with a new jacket (a windbreaker, rather than a sport coat). The head is a uinque sculpt, of course, though it looks a bit younger than it should - this is a 1990s Stan, not a 2012 Stan. His dark glasses are permanently attached, but they're translucent and the eyes behind them are sculpted.

This is still the pre-Nick Fury mold, with the bad ankles,

so Stan is going to be permanently pigeon-toed, unless you want to twist his entire leg to the side. It also mean he's prone to falling over. (Also, from having grandparents, there's no way you can convince me Stan was wearing dress shoes at this time and not sneakers.) He comes with two accessories: a Captain America shield (the one with the flat star and the molding error on the back) emblazoned with his signature across the front, and a folded chess board. It's a dang good thing this toy's packaging explains 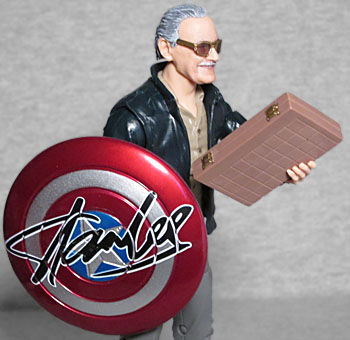 that the toy is "inspired by Stan Lee's cameo as a skeptical chess player in Marvel's The Avengers," because otherwise we'd have had no idea what that thing was supposed to be. It's not a very good accessory, just a brown rectangle with some lines etched into it and gold painted latches. At least give it an actual hinge, so it can be opened! Neither of these accessories are going to win any awards, but Hasbro probably felt the figure alone wouldn't be interesting enough. At that point, why not just drop the movie pretense and load him up with all the themed accessories you can? Give him a Mjolnir and an Iron Man helmet. And a web-shooting hand. 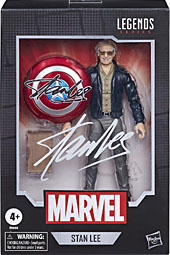 Collection figures had, with silver foil around the window, behind the figure's name, and used for the "EXCELSIOR!" logo on both sides. Another replica signature is printed in white on the front panel, while the back shows him posed the same way he was in the movie (and puts him next to the movie poster, to really drive home the inspiration). At the bottom is a tiny logo for Stan Lee's POW! Entertainment, who probably control his likeness and therefore would have been the ones to license it.

Stan would have been a pretty crummy Build-A-Figure (though he certainly would have helped sell that Bucky/Falcon two-pack), but considering the last Stan Lee figure was a 2007 exclusive, there are a lot of fans who will be overjoyed to have this opportunity to own The Man in plastic.

Now if only someone was on speaking terms with the heirs of Jack Kirby...