My thought process: "do we really need another black-suited Spider-Man? We just got one... nine years ago? Good lord." 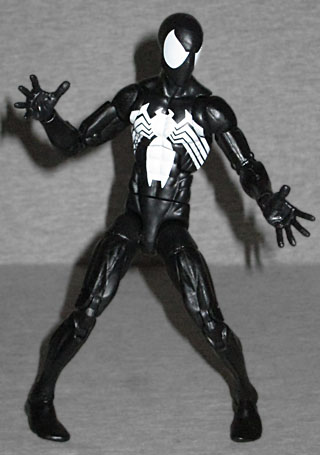 That makes it sound like he has the powers because he's dressed in black, doesn't it? It doesn't even tell us whether this is the symbiote costume he got on Battleworld, or if it's the cloth facsimile he wore later. Heck, it doesn't even tell us whether this is Peter Parker or not! I mean, we know it's not Ai Apaec, because it's only got two arms, not six, but it's entirely possible this represents the Dark Avengers version of Mac Gargan, when Norman Osborn gave him a drug that reduced his monstrous size so the public would assume he was the real Spidey.

This figure uses the Spider-body, because if it ain't broke, don't fix it. Although, in this case, it might be broke: on my figure, the left pectoral hinge joint feels stuck, and I'm not sure whether heat or cold would be better to fix it. Or maybe I should just leave it - the way the legs of the white chest-spider are painted, they extend onto the pec joint, so when you flex the arms outward, you get a giant flash of white paint that kind of breaks the illusion.

Spider-Man doesn't get any webshooting hands, because he didn't have to fold his fingers to "thwip" when he was wearing the symbiote: the webs just shot out of the backs of his hands, which is why he gets fists. There are also the splayed "climbing" hands, which are a nice inclusion. Because Black Spidey's eyes were often drawn slightly larger than the ones on the usual mask, the toy gets the big-eyed Scarlet Spider head. 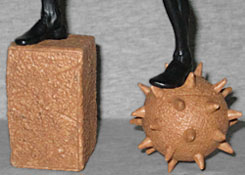 He comes with two Sandman pieces, because what I really needed was more incomplete Build-A-Figure parts on up my desk. Venom, Juggernaut, Doomsday, Killer Croc, Abomination, Dormammu, and now Sandman's hands. If I hadn't already put Onslaught's head on, that'd be there, too! Such is the pain of being an obsessive toy collector.