Well, the world is in lockdown, movie theaters are shut, and there's no timeframe for when they'll be back. Three weeks ago (March 20-22), the number two movie in America had a total box office take of $78. Seventy-eight. Depending on where it was being shown, that could be, like, six people watching it. The Trolls sequel comes out this weekend, and it's "premiering" in drive-in theaters and on OnDemand services. Disney is probably waiting to see how well that strategy works before they decide what they're going to do with Black Widow next month, but thanks to Walgreens, there are already some toys on the shelves.

So, bit of a spoiler for Endgame, but movie news sites desperate for 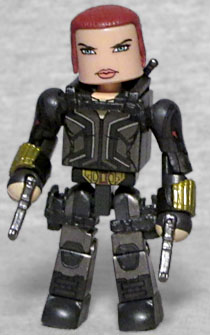 content tried their hardest to make hay out the fact that Black Widow is going to be set in the past. Well, of course it is, Natasha's dead, a movie starring her right now wouldn't be very interesting. You couldn't even watch her decompose, because they didn't have a body.

Past-Natasha has not substantially changed her fashion choices. She wears a black costume with a few gold elements (the belt, the bracelets), which is honestly a bit more comicbooky than she usually gets in the movies - they've tended to leave her accents dark. There are silvery costume elements printed front and back on the body, leaving her plenty shadowy until the light hits them just right. Though she has two holsters, the set only includes one gun - at least, it appears to when you first look, because they're so thin they can both fit into one slot in the tray. She's got sheathed batons on her back. Her hair is braided and then pulled into a ponytail, so that's a new piece as well. 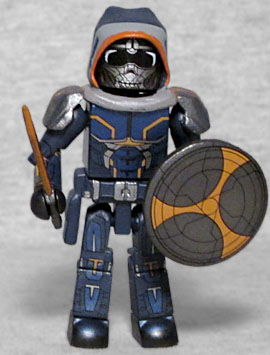 The villain for the movie is Taskmaster, which doesn't quite seem right for her power level - we're not saying that only a full Avengers team should be able to take him out, Gary, but in her solo stories, she's usually facing off against other spies with similar talents, not a guy who can copy any fighter he sees. (Honestly, he would have been a great villain for Agents of SHIELD, but what're ya gonna do?)

The movie Taskmaster suit does a nice job of translating the comic design into the MCU. It's mainly blue (and black) with orange outlines and panels that aren't quite "white," but light enough to stand in for it. The mask they wear looks like a silvery skull. Their accessories include a shield, a sword, and a single new piece that combines hood, shoulder pads, and jetpack into one.