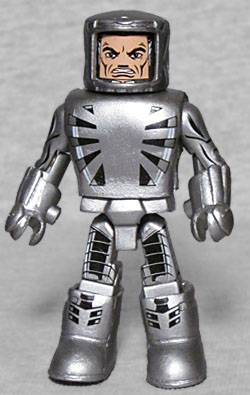 Where did J. Jonah Jameson get all the money to bankroll all the villains he helped create? Maybe it was all the pennies he pinched when it was time to pay Peter Parker for the photos he took. Also, at some point between grafting a private detective into a non-removable bug suit and personally funding an army of unstoppable killbots, you'd think JJ might have stopped to reconsider the life (and financial) choices that had led him to this point. He had to be doing his own reputation more harm than good, yeah?

While later Spider-Slayers had more alien or animalistic appearances, the original few were just a giant humanoid shape. Well, the original original looked like a barrel on casters, but it was still human-ish. This is the Mark II, however,

which was more humanoid than the Mark I. The figure has a chest cap painted with the little black triangles that create a spider symbol with their negative space. There are shadows and highlights on the limbs as well. He has a waist cap and an extender to make him suitably taller, plus metal hands and feet previously seen on a Sentinel. The helmet is new, with a unique sculpt and an opening in the front so you can see the televised face of J. Jonah Jameson remote-controlling the suit.