In a time when most malls are failing (and not just because of cautionary health lockdowns), something outside the realm of reality is going on at the Transformers BotBots mall (and not just the cloud of Energon bringing everything to life): we already know there's a sporting goods store, because of the Jock Squad, but now there's also a separate camping store, home to the Wilderness Troop?

This is the Series 4 repaint of the "messenger bag" mold, following Series 2's Tool Bag and Series 3's Nanny McBag. The notion that this is a first aid kit 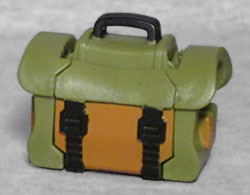 suggests it's meant to be in a different scale than the previous one - a diaper bag is way bigger than the kind of kit you'd keep your bandaids and Neosporin in. But on that note, if this is meant to be a medical bag, why's it done in olive green and tan? Shouldn't it be red and white? If you go buy a first aid kit from the store, it's almost always going to be in red and white, because that's a color combo we've come to associate with grabbing something fast when you need it urgently. Even blaze orange would be better than green, if you want to keep with colors you might see out in the wild.

BotBots are generally simple designs easy to convert, and the toughest thing here is getting the feet to fold down out of the bottom (though it's not as bad as the Series 1 version). Other than that it's just a question of moving the arms to the sides and pulling up the head.

Accidents can happen anywhere, that's why Doc Kit is always prepared when the BotBots go out on a little adventure. 485 bandages? 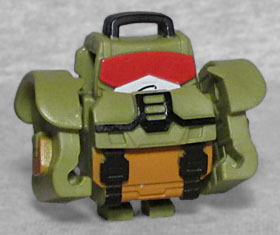 Check. 28 emergency blankets? Check. 10 ice packs, 4 arm slings, 6 rolls of gauze, and a signal flare in case they get lost? Check, check, and double check. And that's just for a trip to the bathroom!

Stereotypically, medical professionals are not large, physical people - that's what the orderlies are for. But Doc Kit isn't necessarily a medic, they're just distributing supplies, so looking this chunky makes sense: gotta be strong to hand out a blanket that's bigger than you are! The face is really just a red visor above a little painted frown, but the sculpted details on the body make this look like a robot rather than a cloth bag. 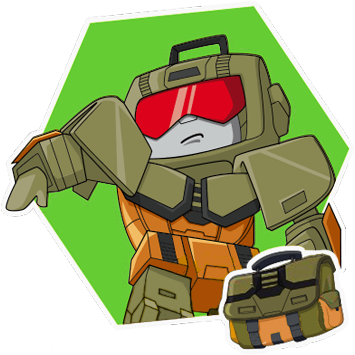 Doc Kit is available in a Science Alliance 5-pack, a Movie Moguls 8-pack, and a Wilderness Troop 9-pack. Plenty of opportunities to find this one if you want it.